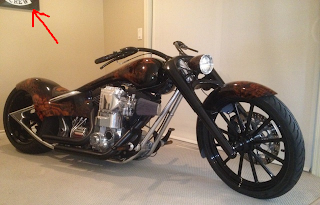 Crimestoppers is reporting a stolen custom motorcycle from the 800 block of Westview Way, West Kelowna. Why that’s where Josh Armstrong and Reza Rahiman from the defunct Kingpin crew live. You can even see the Kingpin Crew logo in the corner of the picture. It is a nice bike. Looks like one of Goldammer’s creations.

The resident reported that his custom built motorcycle had been taken from his driveway while he was out of town. That’s strange. He doesn’t park his bike in the driveway overnight let alone when he goes out of town. They even have a surveillance video of the alleged theft. Sure sounds like a scam to me. Paying that claim would,be a crime.

The Kingpin crew were implicated in a stolen car ring tied to Johnny Newcome and the Hells Angels. This just sounds like more of the same old BS. In that case, the police are alleging the President of the Kelowna Hells Angels reported two vehicles as stolen, and the vehicles were later processed at Newcome's garage. Police also recovered three stolen vehicles that were allegedly in the possession of the Calgary Hells Angels chapter. Only rats would steal a motorcycle. Scamming ICBC effects all our insurance rates. Freakin parasites. Get a real job. 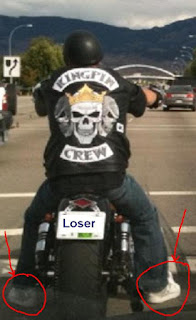