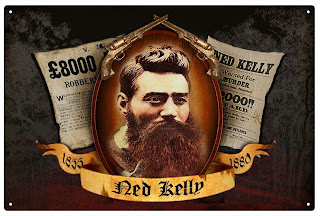 We remember how the Hells Angels invaded Australia and told a local bike group called the Finks to kiss their ass or leave town. Chris Hudson decided to kiss their ass and was awarded a new Harley for betraying his club. He’s the guy that shot a father dead for intervening when he was beating his girlfriend in public. Not a good start to their Australian invasion.

The term outlaw in Australia hasn’t always meant bad guy. England sent prison ships to Australia filled with Irish political prisoners. These weren’t criminals. These were freedom fighters. Ya gotta wonder what the British were thinking. Sending an Irish “criminal” to Australia was like sending him to club med.

Don’t get me wrong. I love the holy land. It’s just the image I have of those cold damp rock caves in Dingle scarcely compare with the warm wonders of Australia. Obviously the British were just trying to get rid of their trouble makers yet sending them to a beautiful place like Australia was hardly a punishment. Ned Kelly was one of the more famous outlaws in Australia that held a kind of Robin Hood popularity with the people.

Australians have always been known for being tough. We remember Gallipoli. Sadly, this is no Gallipoli. This has nothing to do with fighting for freedom. It’s about greed fighting over a monopoly on the drug trade. It has nothing to do with riding motorcycles. Yet if they stand against the Hells Angels international plague of crack and crystal meth then I salute them and wish them well.