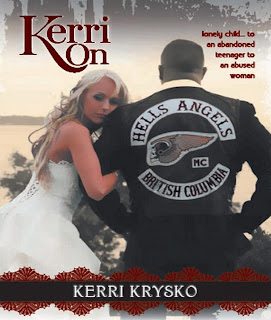 Kerri Krysko has released a new book called Kerri-On. The book is a memoir about how she became the ex-wife of a full-patch Hell’s Angel and paid the price in years of physical, sexual and mental abuse. Obviously she is more than the ex wife of a member of the Hells Angels. Yet I think her first hand account can show how loneliness can turn to the artificial glamor that isn't what it appears to be and the abuse that goes along with it. It should be a good read.

I haven’t read the book and I don’t know this woman’s story so I can’t comment on it. I just put it out there because it’s news and it’s relevant. I’m certainly not saying all Hells Angels abuse their wives. This one may have I don’t know. I’m saying Hells Angels profit from drug trafficking. Usually the spouse of the Hells Angel that profits from drug trafficking also benefits from the proceeds of crime. What appears to be a nice family on the outside benefits from some pretty horrible violence behind closed doors.

No doubt some Hells Angels may in fact abuse their wives. I’d say it would be uncommon. Possibly not even as common as the number of police offers who abuse their wives. A Kelowna cop was convicted of beating his wife and that former cop from Alberta was recently convicted of shooting his ex in the face with a 9 mm. I’m more concerned with the far more common problem of Hells Angels who bully people in the drug trade and are involved with human trafficking like the German chapter in Spain and forced prostitution like the woman from Nova Scotia claimed. I don’t think many Hells Angels pimp out their wives. Yet many do live off the avails and abuse the woman they pimp.
MC & Gjengkriminalitet
MC & Gjengkriminalitet is neutral ground.This blog has NO club's affiliation, we're only here to spread the news about what´s going on in GANGLAND around the World.