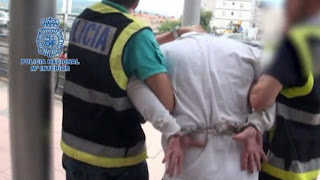 Four Canadian Hells Angels have been busted in Spain after allegedly smuggling 500 kilos of cocaine there from Columbia. One of the four Canadians arrested was on the vessel. One of the three men that met the vessel was a known member of the San Diego Hells Angles. These guys are crazy. Normally they get other people to do that kind of work so they don't get implicated. The Vancouver Province has posted a link to the YouTube video of the arrest.
MC & Gjengkriminalitet
MC & Gjengkriminalitet is neutral ground.This blog has NO club's affiliation, we're only here to spread the news about what´s going on in GANGLAND around the World.