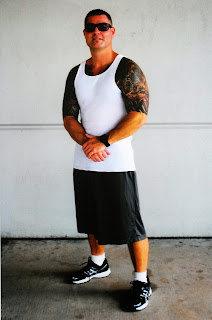 Not to say that the offenses these two Canadians committed are in any way comparable. Extraditing Mark Emery for selling a few seeds while they allow the Hells Angels to extort Mark and the entire Vancouver 420 movement by selling pot openly across the street at the black door and at the Bulldog Café is hypocritical and suspect. It is disproportionate and represents unequal protection of the law.

Clay without doubt is in a league all by himself. No doubt his following scares the authorities. For that reason, I am unsure if a public campaign to support his prison transfer will have the desired result. The more followers he has the more fearful they will be of him and will be more likely to send him farther away. Which in itself is also problematic because wherever they send him he makes more friends and new contacts. Let’s face it, Clay is a pretty likeable guy. Very charismatic. Sells a very appealing message of loyalty and respect. The same terms the Hells Angels use as they stab you in the back to make a buck.

The question we need to ask is are the UN any different? Are they any better? Do they talk the talk or do they walk the walk. Everywhere you go the struggle between good and evil exists. It exists within any organization as well as within every mind and heart of each individual. We cannot understand or appreciate one without the other but clearly we must support good and shun evil if we are attempting to find peace and enlightenment like the Zen masters of old.

Let’s talk about abuse. Beating up your wife or girlfriend isn’t a sign of enlightenment or self respect. It’s the opposite. Kerri Krysko is breaking her story about her involvement in the gang world that was abusive. Don Lyons and Donnie McWhirter from the Independent Soldiers in Kelowna have both been charged with beating the exs. Yet so has Ryan Holt from the UN.

Obviously individuals in their own personal struggles with good and evil sometimes cave in to the dark side and violate the rules of the club they joined. The question is, what does the club then do about it? Do they turn a blind eye or do they take the person aside and say yo man that is messed up. I’m not talking about shooting them for beating their ex. I’m talking about dealing with it instead of ignoring it and hiding it. The club I refer to could be the Hells Angels, the UN or the RCMP. We see the same problems exist in all three organizations. Rage and denial is archaic. We need to fess up to it and deal with it because it’s not going away.

Let’s talk about good and evil. Obviously one can’t exist without the other. Yet there’s a huge difference between selling drugs in clubs and selling crack on the street. Let’s talk about Janice Shore. What they did to Janice Shore was messed up. Janice was quiet, polite and soft spoken. She was homeless with an addiction. Giving her or anyone else free crack then beating the life out of her for payment is predatory. That is evil. There is nothing good, noble or respectful about it. Claiming there is simply is a lie.

Materialism and greed are not virtues of a Zen Master or the Eastern philosophies. Take Taoism or Confucianism. Materialism and greed are the exact opposite of what those Eastern philosophies teach. Torturing crack addicts in basements so you can drive a new butt ugly SUV that looks like a freaking soccer mom’s mini van is messed up. It’s not the real world. It’s a delusion.

Clay’s got a lot going on. He’s got a new song. He’s putting out books and possibly even a movie. Yet this follower he has concerns me. He needs some time with Dr. Phil. 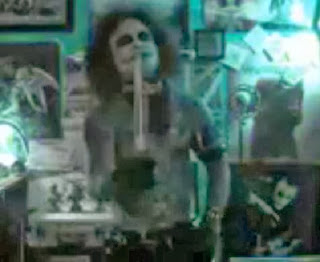 He appears to be a tattoo artist from Austin Texas. He’s got a good flow, is talented but he really needs to lose the face paint, the knife and the obsession with the dark side as portrayed in Batman’s Dark night. That stuff is kinda messed up. If he can set that part aside, he’d be solid.

Take Shane Bunting from Mad Child. That guy is really messed up. He is freaking deranged. Compare Shane with Macklemore from Seattle and you see two extremes reveal two very different worlds. One represents good, peace and enlightenment, the other represents darkness, confusion and misery. We need to support good and shun evil. That’s walking the walk not just talking the talk. Word. Yo Clay: I’d like to do an interview with you. Tom Jones, Gangstersout
MC & Gjengkriminalitet
MC & Gjengkriminalitet is neutral ground.This blog has NO club's affiliation, we're only here to spread the news about what´s going on in GANGLAND around the World.