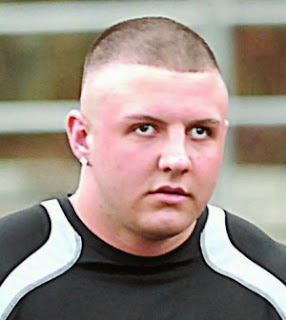 There's been a lot of talk about the testimony of Person Y at the Surrey Six who is referred to as the Crown's star witness. I haven't had time to keep up with the trial but Kim Bolan has been covering it completely. A blog reader was discussing some of the statements Person Y made in court that Kim posted on her Twitter.

Evidently, Person Y was Jamie Bacon's body guard. He would go with Jamie to the gym so Jamie wouldn't get hurt. Person Y claimed that on one occasion, Jamie was upset with Person Y because Jamie and Person X were at a gym and two fat Hells Angels kicked them out. Jamie was upset Person Y wasn't there to protect him. Kinda strange how two young guys on steroids got kicked out of a gym by two old fat HAs but that's beside the point.

Person Y claimed after that he found Spike, the Haney president, alone at a gym and kicked him out. Spike isn't very big. He just has a reputation behind the patch so to speak. Nino, the Sergeant at Arms, isn't very big either. He just hides behind Brian Airth (Bags). However, there are rumors floating around that Bags has just been kicked out so Nino and Spike don't have the muscle protecting them that they did before.

Here's the deal. One blog reader was pointing out that the Hells Angels operate differently than most other gangs. In the HAs each chapter operates independently. Just because one chapter is enemies with one group doesn't necessarily mean another chapter will be. Hence we had some HAs working with the UN while John Punko was caught on wire saying the UN aren't welcome in BC and they won't do business with anyone who does business with the UN. Punko was obviously upset the UN kicked their ass in Brandy's. That was when Michale Plante got knocked out by K9. John Punko had some jurisdiction in Surrey since Kerry Ryan Renaud was working for him.

We know that at one time the Independent Soldiers were independent. After the Loft Six shooting that all changed. The old leaders that had beef with the HAs were shot or killed off and the new leaders paid their allegiance to the HAs. The HAs took over the IS and made the IS work for them. Case in point, Larry Amero and Randy Naicker. Randy Naicker was also at the Castle fun Park meeting with the Bacons before the Surrey Six. Randy Naicker and James Raich were both present and were representing the IS who at that time were working for the Hells Angels. So this whole wolfpack cubpack thing wasn't really a new allegiance. Wolfpack81 was just Larry Amero's gamer tag on Xbox.

So although a couple of fat HAs kicked Jamie Bacon out of a gym on one occasion, it is clear that the powers that be saw the Bacon Brothers as a means to take over the RS who were working for the UN and make the RS work for the HAs like the IS. After all, if Jamie Bacon was so easily controlled by a couple of fat HAs, he was the perfect puppet for them to have take over the RS.

Obviously Person Y giving Spike a hard time would have won points for him with the UN. However, we know that Spike was supporting the Bacon Brothers after the Surrey Six. That's why his niece was representing him with Larry Amero and James Riach in Kelowna just like his other niece was representing him in the Philippines with James Riach and Barry Espadilla. We know that the Hells Angels were supporting the Bacon brothers before the Surrey Six because Larry Amero was Jonathon's friend and the IS who worked for the HAs were supporting them. It's like the Vernon Greeks. At one point Mike R was giving the Vernon Greeks a hard time until they got official sponsorship from the Calgary chapter which meant Mikey had to back off.
MC & Gjengkriminalitet
MC & Gjengkriminalitet is neutral ground.This blog has NO club's affiliation, we're only here to spread the news about what´s going on in GANGLAND around the World.