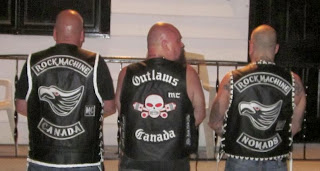 The Vancouver Province is reporting that several individuals wearing Rock Machine colours have been spotted in the Lower Mainland and that a RM associate contacted a reporter claiming they have plans to start up a chapter within the year. This is both good and bad news. Good news in that it brings hope for a free market. Please come to Surrey. We rather have RM than the Surrey Girls. Bad in that from what we've seen, the RM are just more drug dealers who like to blow shit up. Steven King crossed over to the RM after leaving the GTS.

This is obviously a new Rock Machine that was resurrected by Sean Brown before they kicked him out. Most of the old leaders crossed over to the Hells Angels when Mom Boucher went to prison. Salvatore Cazzetta, Giovanni, Paul Porter and Sal Brunetti all crossed over in 2000.

Evidently Joseph Strachan from Winnipeg is out in bad standing.

Julian Sher is quoted as saying If the Rock Machine showed up in Vancouver and drove down Robson Street, they wouldn't make it to Stanley park. Although that's an obvious exaggeration since Robson and Stanley Park are totally tame, his point remains in effect. It is the public opinion that the Hells Angels are so powerful in BC no one else is allowed to wear a patch without their permission. Hitler revisited. That is why I have this website and blog.

I don't have beef with the UN. I hate crack and I don't support the predatory drug dealers out there that give the homeless free crack then beat the life out of them afterwards for payment but dial a dope operations and drugs in clubs is none of my business. That's personal choice. It's the predatory thing I have beef with. Torturing addicts for drug debts. If you didn't front them the drugs there wouldn't be any drug debts.

I also have beef with liars and the Hells Angels are compulsive liars. How do you know Ricky C is lying? His lips are moving. Ask him about the Devil's Butler will ya. I want to know about his involvement in that. The Hells Angels lie and say they don't sell drugs. If any of them get caught the Devil's butler says we don't know them or they were acting on their own not for the club.

The UN don't lie about it. They say yeah we sell drugs. They have even stamped their logo on a brick of cocaine. The Hells Angels lie and say they don't when they do. The problem is, not only do they sell drugs but they say no one else is allowed to sell drugs but them and use extreme violence to obtain a monopoly on the drug trade while they tax and extort everyone in it. That is not a free market. That is my beef. The Hells Angels lying about selling drugs and them claiming no one else is allowed to sell drugs but them. That is why I have this blog and web site.
MC & Gjengkriminalitet
MC & Gjengkriminalitet is neutral ground.This blog has NO club's affiliation, we're only here to spread the news about what´s going on in GANGLAND around the World.