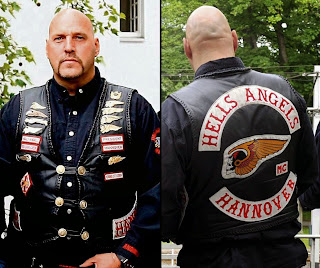 In Quebec, the biker war had absolutely nothing to do with riding motorcycles. It was a war over drug turf. Julie Couillard's ex husband was Stephen Sirois. He sold drugs for the Hells Angels in Montreal through the Rockers, not to be confused with the Rock Machine. In Quebec, the court heard that the Hells Angels contributed a percentage of their drug profits to a fund to murder rival drug dealers. That is all well documented now.

Personally I'm not concerned about indoor facilities the Hells Angels are involved with like the Garden of Eden in Kelowna because that appears to be consensual. What concerns me is the huge level of exploitation that goes on at the street level. However, as many human rights groups strive to raise the awareness about human trafficking in Canada, it appears that many of those indoor facilities also include forced prostitution and human trafficking. In Germany and Spain the Hells Angels were charged in a large human trafficking ring. Right before Canadian Hells Angels were caught in a huge cocaine bust there.

I met with a friend from Montreal who talked about one brothel he visited in Montreal run by the Hells Angels where a woman was chained to the bed, she had a bucket to go to the bathroom in and she was paid in drugs. He said it was the most disgusting thing he had ever seen. Another example of how low predators can go just to make a buck off of sheer exploitation.

Again, the problem is greed. It's not enough for the Hells Angels to be involved in criminal activity. They are obsessed with using violence to obtain a monopoly of that trade. Years ago the Haney Hells Angels ran a brothel in Kamloops called La JJ's just like the one in Maple Ridge. Another woman who had saved up her money tried to set up an independent brothel. The Hells Angels told her she wasn't allowed to. She did anyways so they tried drowning her in her bathtub. Her dog saved her life and she was never heard from again. That's my concern. That's when it stops being consensual. When people are forced into that industry against their will or they are forced to work for the Hells Angels against their will.

The CBC reported that a woman who was forced into prostitution by a Hells Angels member said she was too scared to report the man to police. They had a walk in Nova Scotia to raise awareness about human trafficking in Canada including the Hells Angels involvement. I find it very disturbing and very concerning when a prominent Vancouver advocate for sex trade workers publicly promotes the Hells Angels. That is obscene.

While we're on the subject, let's not forget Adam Hall. The Berkshire County Sergeant at arms. Another white Hells Angels accused of forced prostitution. Court affidavits claim he forced three women into prostitution and told them "You work for me now," he allegedly told one woman "There's no way out of it." One confidential informant told police the forced prostitution took place at the group's clubhouse on Woodland Road in Lee, according to the affidavit.
MC & Gjengkriminalitet
MC & Gjengkriminalitet is neutral ground.This blog has NO club's affiliation, we're only here to spread the news about what´s going on in GANGLAND around the World.