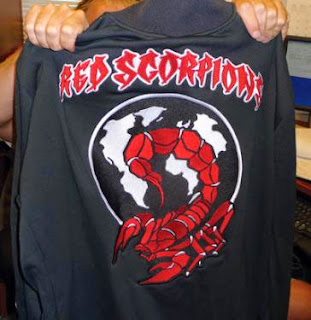 The Calgary Herald is reporting that a member of the Red Scorpions and three associates have been arrested in Alberta. Search warrants executed in Airdrie, Red Deer and Calgary last week focused on the gang's drug-trafficking operation and its infiltration of the Alberta market. Police say firearms and drugs have been seized.

Let's be clear about one thing. Neither the Bacon brothers nor the Red Scorpions are nototious. They are notoriously whacked. They are hated and despised. No one likes them for good reason. The Surrey Six totally crossed the line. Everyone and their dog has flipped on them over that. The Bacon brothers are suburban princesses from Abbotsford that were empowered by the Hells Angels. They adopted the ridiculous logo that looks like a cheap Karate school tied to Red Lobsters.

The Bacon brothers took over the Red Scorpions during the Surrey Six and made them a Hells Angels puppet club just like the Independent Soldiers are. Unlike in Edmonton, the Calgary Hells Angels are trying to distance themselves from drug trafficking. In Edmonton there's no hiding their direct involvement. However, in Calgary the Independent Soldiers work for the Hells Angels and have been supplying the FOB. The UN have been supplying the FK. When the Red Scorpions arrived in Alberta, that's still part of the Hells Angels drug trafficking network. 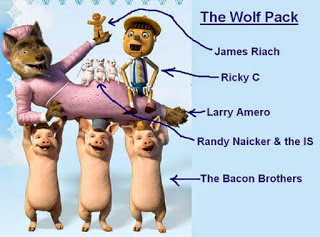 Update: The Edmonton Journal is reporting that the name of the Red Scorpion arrested is Cory James Lesperance, 29. Global is reporting that Cory is originally from BC and that his associates that have been arrested are Robin Joseph Stewart, 52, Nicholas David James White, 21, and Amber McLeod, 23. Police seized crystal meth, pot, cocaine and some firearms. Police claim this drug trafficking network has been in operation for two years. Cory and the three associates have been accused of establishing a drug distribution network in Calgary, Airdrie and Red Deer. Gee, I wonder who else we know that lives in Airdrie? Alberta Police Report 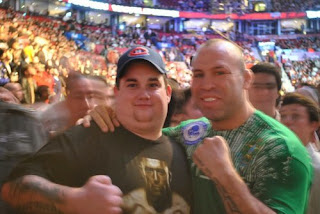 Kim Bolan is reporting this is a picture of Cory James Lesperance. You've got to be kidding. I saw that profile on facebook and said no way. That's notoriously whacked alright. Look at the double chin on that chubby chicken. Geeks of the world unite! The Red Lobsters have sure got desperate since the HAs took them over.
MC & Gjengkriminalitet
MC & Gjengkriminalitet is neutral ground.This blog has NO club's affiliation, we're only here to spread the news about what´s going on in GANGLAND around the World.