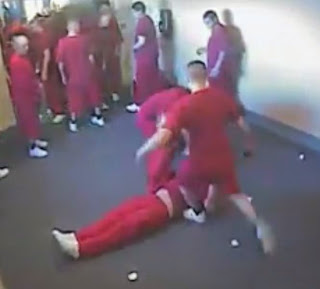 Someone sent me a copy of the video of Jay Hall's prison beat down last year. I'm not going to post it because it is very disturbing to say the least. I will comment on it and post screen caps. First it's from a surveillance video that was played in court. No one video taped it on their cell phone. The video was posted on one of his attackers facebook bragging about it which is somewhat ironic. Two guys snuck up from behind and gave him the boots. There is nothing more cowardly and deranged. 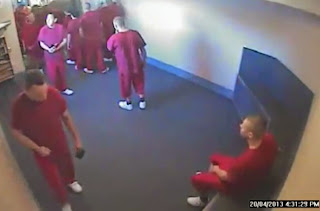 Fist Brandon Badger sits down and waits for Jay Hall to enter. When he sees him he stands up to make sure he's right in front of him in line. 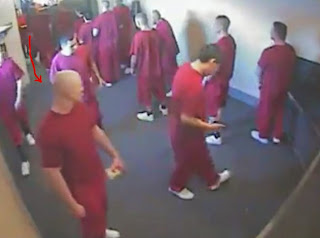 Then this other guys circles around behind him. 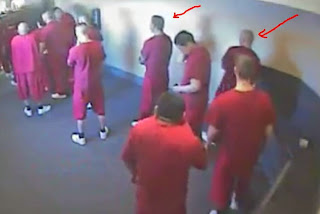 And sucker punches him in the back of the head when he isn't looking. 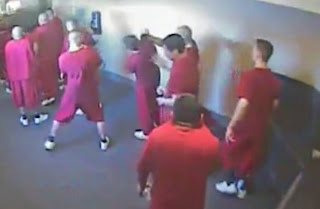 As soon as he does that the first guy jumps in and they both give him the boots. 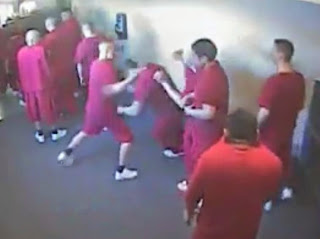 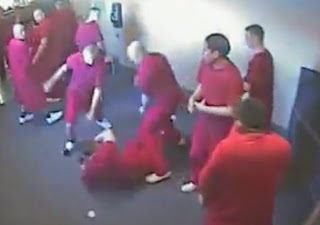 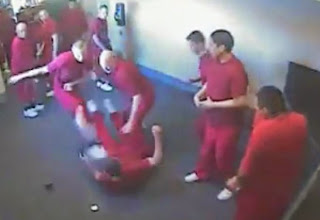 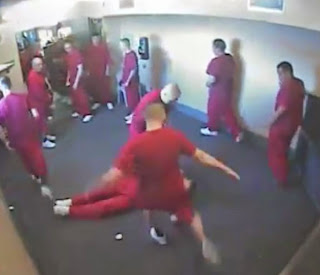 As soon as he hits the ground the smaller guy starts kicking his head over and over again like a soccer ball. That is very disturbing. That is how the man who tried to break up,that house wrecking party in Squamish died. This wasn't an assault. This was a premeditated attempted murder. 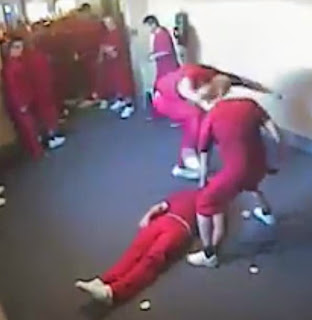 There is nothing manly about this deranged act. I don't care who Jay Hall was or what he did. This was a bitch move. The two guys that jumped him and gave him the boots go down in history in the POS hall of shame. The rest of us who glorify in this kind of deranged violence need to stop and take a look at ourselves in the mirror. We need to ask ourselves what is wrong with us? We have mental problems and even Dr. Phil can't help us until we recognize that.

In the mean time Jay Hall has every right to sue these two POS as well as the prison system. This kind of prison violence is not acceptable and has to stop. In the words of Raiden from mortal combat Enough! If we don't prevent this we are no better then they are. A civilized society does not let this happen. Brutality is a sign of low self esteem.

Speaking of suing the prison system, a member of the UN is doing exactly that. The Vancouver Province reported that Michael Newman is suing the federal government for allegedly failing to protect him from being severely assaulted in a federal prison. Newman was identified as being “incompatible” with Jamie Bacon. No kidding Jamie Bacon is a POS that did the Surrey Six and ordered the hit on one of his own guys. Nobody in Surrey likes him.

Newman was forced to attend a mediation with Jamie POS Bacon and Newman was handcuffed while Jamie Bacon wasn't. That is really messed up. Jamie Bacon getting special privileges in prison? Don't get me started. If the guards set up the fight where Newman was assaulted then he does have a case. It's rather bizarre that they were watching the outrageous brutality of the Jay Hall assault without intervening. That shows there is a problem.

If the Jay Hall beating was in fact paid for, then one has to ask who paid for it? The HAs ae the only ones really capable of pulling something like that off. Did he woe them money? There are no rival drug dealers in Prince George.
MC & Gjengkriminalitet
MC & Gjengkriminalitet is neutral ground.This blog has NO club's affiliation, we're only here to spread the news about what´s going on in GANGLAND around the World.