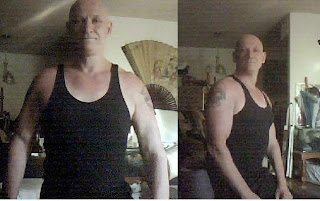 CTV is reporting that Surrey's most ruthless drug debt enforcer was found dead in a Surrey basement at 136 Street and 110A Avenue around 8:30 p.m. Sunday night This is big news. If he wasn't responsible for Janice Shore's murder he knew who was. One source claims he used to work for Len Pelletier and lenny's cousin John Crowston. Kevin Diakiw wrote an article on Larry Mizen. 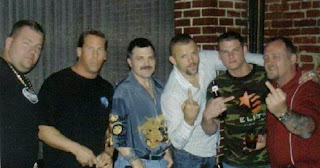 Above is an old picture of Len Pelletier standing beside Chuck Liddell with his cousin John Crowston on the far left of the picture and his other cousin Bob Green on the far right of the picture. I have a source that claims John, Lenny and Eric Montgomery ran houses in Surrey, Langley and Aldergrove. Eric Montgomery is Cliff Mongomery's brother. Eric moved to Abbotsford while Lenny kept doing business in Surrey for you know who. He went to Burnsview. His son took over the 856.

One has to wonder if Larry Mizen is dead because some drug addict he was beating the life out of finally pulled a gun and shot him or if his employer terminated his contract. Everyone in the club seems to hate Lenny but put up with him because he makes money and hides behind Bob Green.

There seems to be a fair bit of overlap in jurisdiction when it comes to Surrey. Bob Green and Glen Hehn are with the Nomads but long time Surrey crystal meth cook Kerry Ryan Renaud worked for John Punko and the East Van Hells Angels. The court was told the East Vancouver Hells Angels hired contract killer Mickie (Phil) Smith to kill Paul Percy Soluk at a crack house in Surrey. Smith said a man he called Yurik helped him chop up and dispose of the body. Smith said "Yurik's not an Angel but he works with the Angels. I know he's done a lot of hits." Yurik didn't just do a few hits, he ran several crack houses in Surrey for the Hells Angles at the time. He's dead now too.

According to a US Indictment Randy Jones and the Whiterock Hells Angels (I mean the new Surrey Girls chapter) are deeply involved in the Surrey drug trade as well. Randy's brother Trevor is still waiting to be extradited on those charges. That was another huge cross border pot for cocaine drug ring tied to the Hells Angels. TBarz which is now called Shakerz was listed in court documents as the hub of that operation. 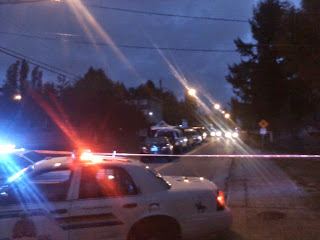 The road was still blocked off Monday night and IHIT had a tent set up. He was found in the house beside the apartment building. Locals say all the windows in the house were smashed and it was boarded up but apparently it was still being used as a crack house. All the pictures I have of Larry are from his public Facebook profile and are copyright free. The media is free to use them at will. 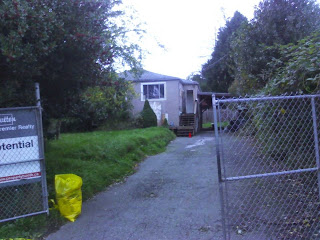 Right after Larry was found dead Scan BC reported that #Surrey #RCMP are investigating multiple reports of two vehicles shooting at each other at 100th Ave & 129 St. Casings found on the ground.

Update: Front Page of today's Vancouver Province was a picture of Larry Mizen holding that giant meat cleaver sword with the caption Whalley Monster Taken down. Very dramatic indeed. Yet this time the story calls for it. My pet peeve is the ridiculous reference to the Bacon brothers as being notorious that all the media outlets keep repeating like parrots. The Bacon brothers were not notorious. They were suburban princesses empowered by Larry Amero and the Hells Angels.

Although Larry Mizen was much more notorious than the Bacon brothers it's still not a word I'd use to describe him. I'd refer to him as ruthless and deranged not notorious. There is not a snowballs chance in hell Jamie Bacon would try and tax Larry Mizen simply because like Ryan Renaud, Larry was already working for the Big Red Machine. Why do you think he lasted so long?

In today's article the Vancouver Province interviewed a couple people who knew Larry. Let's apply those states to the test of believability so we can separate fact from fiction to clearly discern what has happened. Two facts presented in the article are the claims that Larry was associated with bikers and the Surrey House of Horrors. Those are facts. The claim that he was a renegades that would steel from the gangs including the Hells Angels is absurd. If he ever stole from the Hells Angels, he would not have been permitted to work for so many years. He was permitted to work so long because he was working for them.

It's quite possible the Hells Angels pulled a Juel Stanton and terminated his contract. Not because they didn't approve of all the hard work he did for them over the years but because he got them some bad press. The article claims "according to neighbors who have spoken with detectives, Mizen’s bloody body was found in the bathroom of his suite." I spoke with one of his neighbors Monday night. He said previously all the windows in that place had been broken and were boarded up. That would have been a message to leave town and that his contract was terminated. They came back to finish the job.

I have a source that claims Larry worked for Len Pelletier. Does that mean Pelletier's next to get capped? Unlikely because he is a money maker. Ron Lising and his merry band of misfits liked to TAX Lenny's guy's at every opportunity. It became a good source of income for them. The claim that Larry frequented the Surrey House of Horrors but never participated in any of the tortures that went on there is not believable. The Hells Angles ran the House of Horrors. Larry was an enforcer for them. He was directly involved in the violence associated with that hell hole.
MC & Gjengkriminalitet
MC & Gjengkriminalitet is neutral ground.This blog has NO club's affiliation, we're only here to spread the news about what´s going on in GANGLAND around the World.