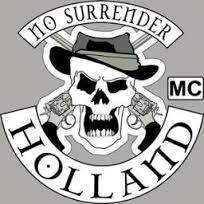 No Surrender MC is a motorcycle club based in the Netherlands. No Surrender was founded in February 2013 by Klaas Otto , former director of Satudarah , and is considered by including the national police as a 1% MC.

The motorcycle would be formed out of dissatisfaction with the policies of Satudarah . Some members of the former Satudarah -chapter Ciganos and some ex-members of the Hells Angels  were also involved in the establishment .

In January 2014 it was announced that Henk Kuipers , former leader of Satudarah , along with some 25 other members and 50 support members switched to No Surrender . The reason for this is not entirely clear .
Reactions
MC & Gjengkriminalitet
MC & Gjengkriminalitet is neutral ground.This blog has NO club's affiliation, we're only here to spread the news about what´s going on in GANGLAND around the World.