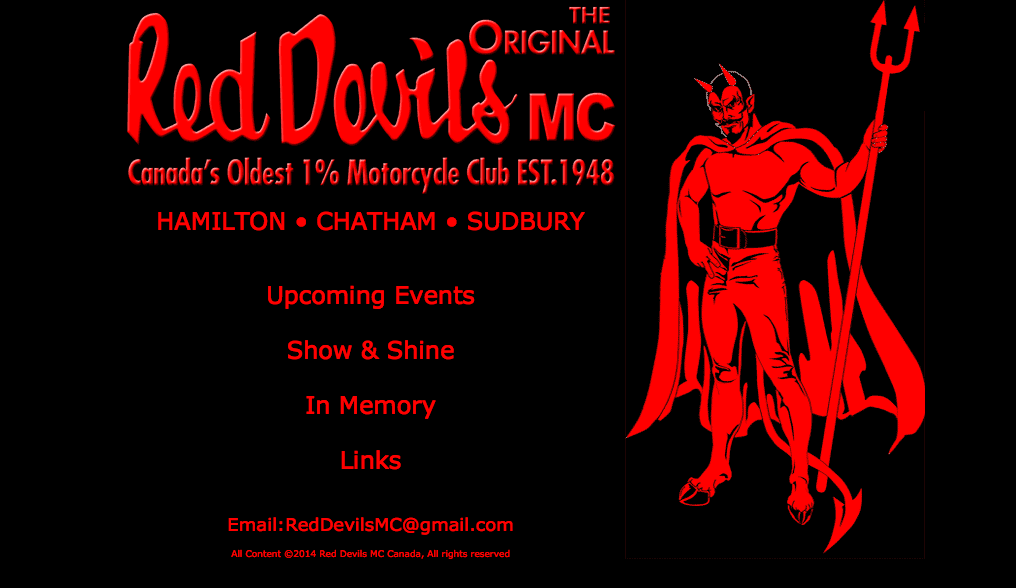 Canada's oldest outlaw motorcycle gang, founded in Hamilton, is no more.
The Red Devils, active since 1949, voted Friday night to "patch over" to an East Coast biker gang they've been closely affiliated with for years.

OPP biker enforcement unit Det. Staff Sgt. Len Isner says they've already photographed known members wearing the patch of the New Brunswick-based club called Bacchus.
The patch has an image of a Roman centurion soldier with a skull face in the centre. Above it is the word Bacchus; below it is the province of the particular club.

The move makes Bacchus the second-largest outlaw motorcycle club in Canada with almost 100 members, Isner said. It's also the club's first expansion into Ontario.
The Red Devils had 31 members, with about 18 in Hamilton. The other members in Chatham and Sudbury have also patched over.

Experts say both clubs have similar low-key attitudes and good reputations. They have worn affiliation patches for years.

However, despite their close ties the decision came as a surprise to many.
"It was kind of a shock, we didn't expect it," Isner said, adding that his officers heard it might happen last week, but didn't believe it until the vote happened.

While the motive for the shift is not completely clear, Isner and others believe it's to avoid confusion with Hells Angels support clubs that also go by the name Red Devils.

The guys were sick of being confused with a puppet club, says a source with ties to the club.
While the move has caught the attention of law enforcement, Isner said he doesn't expect big changes in how the club members operate.

"I think it's business as usual," he said. "We certainly will be paying attention, the same as we always have."

In a recent interview with The Spectator, then Red Devil spokesperson Ray Philp described his clubmates as "older and wiser," noting most have legitimate work or are retired. He says they're not criminals.

However, police contend that criminal biker gangs, including Bacchus, make money however they can, including drugs.

It's not yet clear if the move will see any changes at the clubhouse on Arden Avenue, off the Beach Strip. That's where the Red Devils have hosted a "show and shine" every Father's Day weekend.
In recent years it's benefitted the CNIB, but used to raise money for the son of a Red Devil, 32-year-old Michael Carey, who was killed when an unknown gunman shot up the clubhouse in 1984.

Police stormed the clubhouse in 2000, using a battering ram and concussion grenades. They found two shotguns, one rifle, ammunition and a small quantity of drugs.

After years of relative obscurity, the club made news this summer with the motorcycle crash death of member Steve Marcotte. The 44-year-old was killed in a collision with a tractor.
MC & Gjengkriminalitet
MC & Gjengkriminalitet is neutral ground.This blog has NO club's affiliation, we're only here to spread the news about what´s going on in GANGLAND around the World.