Spotlight on the Whiteboy Posse 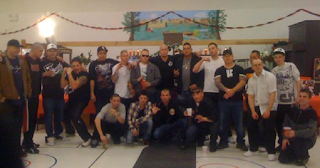 Mark James Horning (fat joe )& Sean Jackson (fat mike ) started the Whiteboy Posse in 2003. Jackson and Horning met a Hells Angel prospect who went by the name sneeze who later died as a result of a suspicious morphine overdose. Sneeze ws close friend and a partner of Dominic Dipalma Jr. Who is also known as Dom Jr.

Jackson developed a strong relationship with Dom jr. Jackson and his guys started hanging out at the clubhouse and buying mass amounts of support gear all the while Jackson was purchasing aprox 1 kg of Coke daily off of Jr. 2007 Jackson gets busted and has heat on him and can no longer do business with jr. So he agrees to pay 2500 monthly as a protection fee and also to use jr's name if need be. Dominic jr is very high-ranking he got his patch at 22 his dad is Dom sr & was rumored at one time to be the president of Alberta. Junior left Edmonton to become a Kelowna member somewhere around 2012. But was recently arrested as a part of the Westridge six bust In Edmonton. This is a picture of Dominic Dipalma Jr: 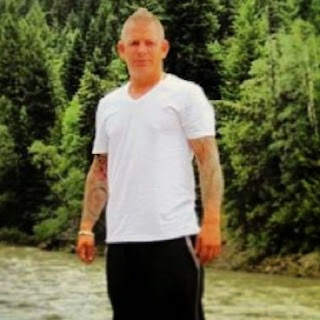 Below is another picture of Dominic Dipalma Jr in Kelowna. Dom Jr is on the left. I previously mistook him for little Ryan from White rock because they are both so small. I'm not sure how the HA's 666 mix with the sacred heart but to each their own. April 2014 Global reported that Dominic DiPalma was arrested along with five other members of the Hells Angels in the Edmonton area. The Edmonton sun reported that they were all charged with robbery and committing an offence for a criminal organization. Di Palma and Lauren Wispinski were also charged with possession of marijuana for the purpose of trafficking , possession of a controlled substance (ketamine) and unauthorized possession of a firearm relating to a .380 handgun. Di Palma was a member of the Rebels before becoming a member of the Hells Angels.

In March of 2000, Radies — then a Rebels motorcycle gang member — was sentenced to 33 months in prison after he pleaded guilty to four counts of trafficking cocaine. The charges stemmed from a police operation in August 1997 in which undercover cops sold the Rebels two kilograms of cocaine and five kilograms of hashish, valued at $100,000 wholesale. At the time the Rebels motorcycle club was a prospective Hells Angels chapter

Blake Adams works for Sean Jackson in Whitecourt, Alberta. Cory Clark is one of Blakes guys and has moved up the ranks and he has distributed cocaine in Prince Albert , Saskatoon, Regina, recently in Grand Prairie where his runner and good friend devin pisch was murdered. Clark currently resides in red deer and is suspected to have a network in that community. 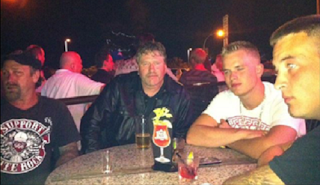 In this picture Cory Clark is on the right while someone in a Whiterock support shirt is on the far left. David lamereoux (deli) works under Jackson. Deli is solely responsible for slave lake but it is likely he does have networks in other towns, he has been arrested charged and convicted of drug trafficking in Lloydminister. Travis mourits works under Jackson. Mathew lavigne is a Jackson member who was part of project Goliath and served four years for trafficking

Joshua Petrin has been charged in the murder of Bob Roth and Lorry Santos. He is also a close friend to southland Hells angel member red beard Jay. Evidently Mark James Horning is branching out into several legitimate business endeavors. This is a picture of the Whiteboy Posse Glee club. 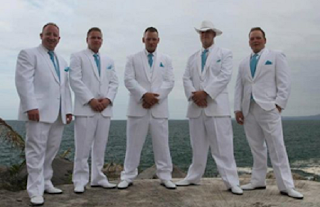 From left to right is Travis Mourits, Blake Adams, Mark Horning, Sean Jackson and Dean Horning. Mark Horning has been accused of doing the money laundering for the group through a company he started called southern Alberta construction services. His wife has also started a string of companies one being independent scentsy home decor. Blake Adams and Dean Horning, Marks Younger brother, have started a car customization rim and tire shop with the consultation and expertise of Dimitri Vinokurov owner of Subserious Autoworks in Edmonton who is also charged in project Goliath.

Randy Duroucher looks like a little punk but is claimed to be Horning's top advisor and is responsible for a lot of drugs that have been moved throughout Wainwright, Provost , Fort McMurray , Red Deer & Camrose. This is a picture of Matt lavigne beside Randy Duroucher in the light shirt on the right. 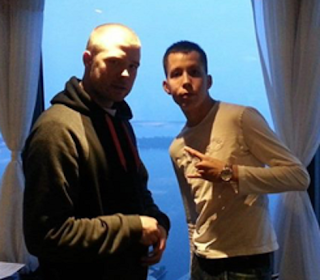 Here are a few more pictures: 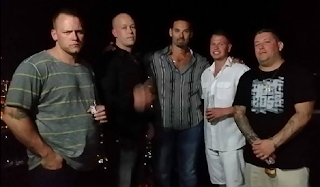 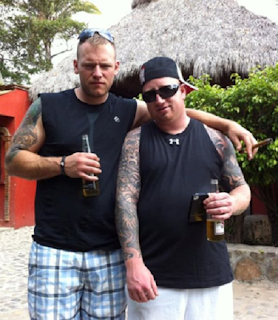 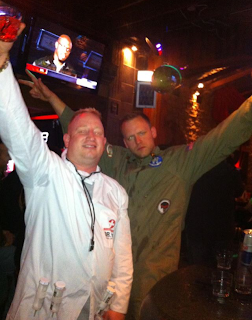 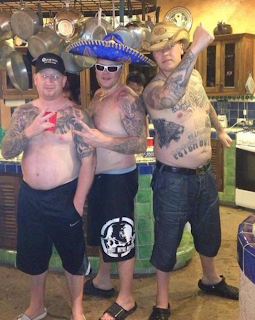 This cocaine network is so large and makes so much money I really don't see anything ever getting done about it. The EPS has a horrible reputation for passing on intel to the Hells Angels. The Alberta Gang Task force called ALERT is doing a great job but it won't be long before CSIS or a high ranking member of the RCMP will shut them down and put some clown in charge like they did in BC. I don't want to sound pessimistic but it is what it is. Evil will always exist and it remains our moral duty to resist it. My emphasis is helping people leave the life if they so choose and to highlight the predatory manner in which they harass and exploit the homeless.
MC & Gjengkriminalitet
MC & Gjengkriminalitet is neutral ground.This blog has NO club's affiliation, we're only here to spread the news about what´s going on in GANGLAND around the World.