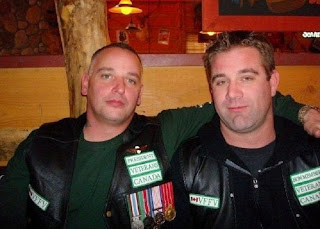 The Times Colonist is reporting that "Nanaimo RCMP have issued a province wide arrest warrant for 39-year-old Colin Lamontagne, who is wanted on gun and drug charges. The charges stem from a major drug bust at homes in Ladysmith and Nanaimo on Dec. 4 where police found clandestine labs producing GHB, also known as the date rape drug. Police say they found a significant amount of drugs, guns, weapons and stolen property."

We remember Colin from his association with the Veterans MC in Landysmith. In 2011 we posted pictures of Colin posing with the president of the chapter. Locals at the time expressed concerns about a Veterans MC sponsoring drug dealers like Colin. They assured us that although Colin had a trouble past he had changed his ways. Evidently not.

When a Veterans MC sponsors and endorses drug dealers it's really hard not to get the impression that they are in reality enforcing for the drug dealers. Veterans are great but anyone who uses the military to sell drugs is just like a dirty cop. One is no better than the other. 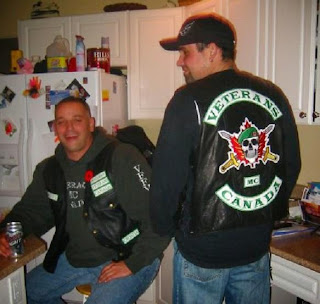