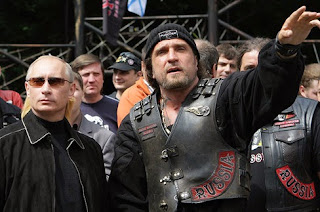 Putin's Night Wolves are in the news again. This time they are going on a ride to Germany and Germany understandably objects. That's because the Night Wolves are political and this is an antagonistic act meant to open old wounds. Hitler was a prick. We all known that but so was Stalin and that was a long time ago. Give it a rest. This defiant ride is in reality a childish war game like those clowns flying bombers over the article circle to see if we will scramble our jets to meet them. F*ck off. Grow up. Don't be such a prick. You don't have to be a bully to be strong. In fact people see bullies as weak because that is exactly what they are.

I have respect for Big Brother because I remember our past history. All of it. The good, the bad and the ugly. Their ride to Poland is totally offensive. We remember how under Stalin's leadership Russia tricked and trapped Poland into bondage for a generation. Poland had been invaded by Hitler. Stalin told the Polish underground resistance to strike promising his troops would outflank Hitler and together they would liberate Poland from Nazi occupation and be free. Not. Stalin didn't show up. Until all the underground resistance had been killed so he could invade Poland himself with no local resistance. It was a piece of sh*t back stabbing move that robbed Poland of their liberty. Yes we remember that.

Big Brother is not always wrong but he certainly isn't always right either. Don't worry Germany. It's pretty easy to shoot a man dead off of a motorcycle. As they always used to say in Belfast, I have always believed int he right to bear arms. Peace.
MC & Gjengkriminalitet
MC & Gjengkriminalitet is neutral ground.This blog has NO club's affiliation, we're only here to spread the news about what´s going on in GANGLAND around the World.