Game Over. On May 9th 2015 I linked to Kim Bolan's article about the Hells Angels control of the docks and Damiano Dipopolo's lawyer threatened to sue me for linking to her article. Yet the case law states linking is not defamation and there is nothing in her article that is untrue.

On May 23rd 2015 I made a post that said Damiano Dipopolo was featured as a regular customer on the TV show the Liquidator. That is a true statement. The screen cap I posted is evidence my statement is true. So clearly, there is no court case. Therefore my final request is simple.

My real identity was leaked out a long time ago. That is nothing new. The threats of harm to myself and my family are not new either. I say now what I said then. I have endured much in this cause over the years. Surely I have earned one final request. You have no legal grounds to stop free speech. So next time, if you send someone with a gun, I ask that they come for me and not my daughter. If you have a problem with me, then shoot me, not my daughter, not my family, not my friends. That is my last request. I have beef with you Damiano Dipopolo and as God lives I will see you on the other side. My word is my bond - à dieu.

Update: In case you missed it, Damiano Dipopolo sent someone to my home last night to threaten me and scare my daughter. As he was leaving he laughed at her and made her cry. It wasn't a legal threat because there was no court summons. Just another letter from his lawyer like the one I previously responded to. That means there was no reason to hand deliver it to my home. It was purely an act of intimidation saying we know who you are and where you live. Well this is my response: F*ck you and F*ck your bullsh*t threats. Negotiations are over. If you want me, come and get me. Only if you are considering taking a contracted hit for Damiano just remember what happened to Joey Verma. Make that little b*tch do it himself. Let it be known that Surrey, like Derry Bogside, is free and Damiano Dipopolo is not welcome here. 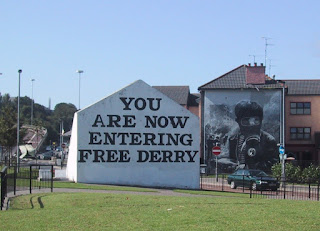 This isn't my last post it's my Reveille. My call to arms. Only I stand alone. There is no help for this widow's son. As you will see I was granted the right to bear arms by lawful authority back when Robert Watt was the Chief Herald of Canada. It's game over in the sense that this is not a game any more nor is it a movie. It is real life. My life - that's on the line. So here it is.

I don't like Bryce but I don't have beef with him. He used to race nitrous Harleys. That's a lot more impressive then anything Skelletor has ever done. I certainly don't have a problem with Doc Riddoch. The Satan's Angels always were f*ck ups but the Gypsy Wheelers weren't. It's Damiano specifically I have beef with. Now it's personal. I'm not from New York but I have been there and I do have a semi automatic that's gonna spit the next time he talks. Metaphorically speaking of course.
MC & Gjengkriminalitet
MC & Gjengkriminalitet is neutral ground.This blog has NO club's affiliation, we're only here to spread the news about what´s going on in GANGLAND around the World.