Feds go after biker gang members... by claiming the rights to their logos

Posted by MC & Gjengkriminalitet May 22, 2015
Prosecutors want to make the Mongols Nation biker badge illegal
Police say removing gang logos diminishes the gang's power
The government will use legal precedent to make other biker     badges illegal
'The logo itself furthers a criminal enterprise,' says one source


Prosecutors are attempting to break up America’s most violent motorcycle gangs by claiming rights to their logos.
If the government is successful, it will become illegal for a member of the 600-strong notorious Mongols Nation gang to wear its trademarked patch – a black-and-white image of 12th century conqueror Genghis Khan riding a motorbike in a pair of sunglasses.
Police sources say that removing gang logos diminishes the gang’s power and identity.
A source told Fox News: ‘It not just stripping them of their identity, or robbing them of a recruiting tool, it's taking the star off their helmet. The logo itself furthers a criminal enterprise.’
If successful, one expert says that the government will use the legal precedent to disrupt other violent motorcycle groups, including those involved in Sunday’s horrific shoot-out in Waco.
Donald Charles Davis, author of 'Aging Rebel: Dispatches From The Motorcycle Outlaw Frontier', told Fox that the other clubs see this as ‘just a first step to what the government wants to do to all motorcycle clubs. They want to outlaw motorcycle clubs by taking their insignia away from them’.
The Mongols Nation badge was registered as a trademark in 2005, but prohibited in 2008 after the ATF arrested over 100 members of the gang on a variety of serious charges, including murder and robbery. However, the ban was later lifted.
The case between the gang and the government will be argued out in an LA court on June 2. 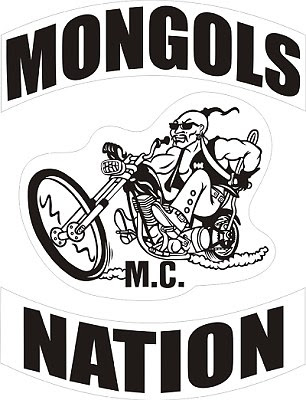 Copy link to paste in your message