The Hells Angels control of the docks 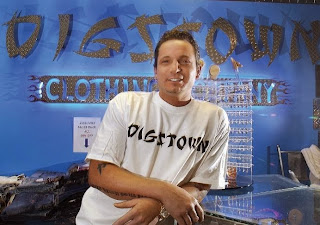 We've talked about the Hells Angels control of the docks for years. Everyone who lives here is well aware of their influence in the hiring process at the docks. Several blog readers sent in links to Kim Bolan's recent blog post on that very subject.

"More than two dozen of the longshoremen unloading container ships on the docks of Metro Vancouver are Hells Angels, their associates, other gangsters or people with serious criminal records, a Vancouver Sun investigation has found." Kim quotes Det.-Staff. Sgt. Len who works for the Ontario Provincial Police. Unlike BC, Ontario still has their Biker Enforcement Unit. Christy Clark did away with ours. Isnor said the Hells Angels have maintained a foothold in Canada’s three largest ports - Vancouver, Montreal and Halifax - for the past 30 years. “So as far as the ports are concerned, it’s the whole success of the Hells Angels.” He must be mistaken. Bill Fordy said it was the three Somalians living in Surrey.

"The Sun has identified at least six full-patch Hells Angels who are active members of the International Longshore and Warehouse Union. Some have worked on the docks for years, like Al DeBruyn, a senior White Rock Hells Angel who started in 1981 - two years before the HA was set up in B.C. Other Hells Angels joined the longshoremen more recently. Rob Alvarez of the elite Nomads chapter and Kelowna Angel Damiano Dipopolo started on May 24, 2012. West Point Hells Angel Ryan Sept started just last year, nominated by another full-patch member of his chapter."

Damiano Dipopolo and little Ryan. That's pretty significant. We had heard that Damiano was working at the docks. This confirms it. He was president of the Kelowna Hells Angels that was charged in a large drug trafficking ring and convicted of a huge stolen car ring in Kelowna. Damiano himself reported a car stolen that was revinned at Johnny Newcomes chop shop. Giving the head of a criminal organization preferential treatment in a preferred job is indeed criminal. It's just like the Vancouver Province article on the Hells Angels getting preferential treatment in the City.

The question is, why are members of a criminal organization getting preferential treatment in the hiring process in jobs that people with criminal records shouldn't be working in? Little Ryan gets in while his pal Randy Jones is named in a US indictment on a huge cross border drug trafficking ring tied to the Hells Angels. They change the name of TBarz to Shakerz and call it the Surrey Girl chapter of the Hells Angels instead of the Whiterock chapter and it's business as usual. That is messed up. They should not be getting preferential treatment in the docks.

In July 1997 the Vancouver detachment of Ports Canada police was disbanded. Right around the time the Hells Angels took over. "The Attorney General publicly opposed this eventual Ports Canada Police demise. This disbandment was done without consultation; thereby putting the final burden of ports policing squarely onto the backs of the local BC municipalities. While publicly decrying the demise of the former Ports Canada Police, the Vancouver Police Department for example were one department claiming they could do with 10 men, what it took 25 Ports Police Officers to do – obviously this would attract supporters, for various reasons." Save money by turning a blind eye once again to organized crime. Only they weren't saving tax dollars. They did less work at a greater cost to tax payers because the Port Police were funded through the Vancouver Port Corporation. That was the fourth strike. Every time a police task force found organized crime, a government body disbanded that police task force. 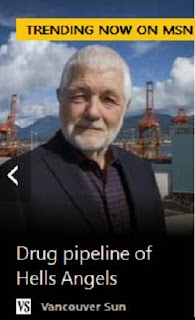 Kim Bolan's article is trending on MSN as "Drug Pipeline of the Hells Angels." and "Drug pipeline: How crime groups infiltrate and exploit Metro Vancouver's docks."

Update: Be advised that linking is not defamation. On a matter of personal privileged, CBC reported that the president of the Kelowna Hells Angels chapter reported two vehicles as stolen, and the vehicles were later processed through Johnny Newcome's Chop shop. Damiano Dipopolo was president of the Kelowna Hells Angels at the time.
MC & Gjengkriminalitet
MC & Gjengkriminalitet is neutral ground.This blog has NO club's affiliation, we're only here to spread the news about what´s going on in GANGLAND around the World.