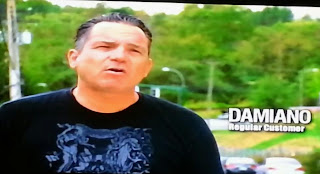 It's sad to see how low someone will go to try and boost ratings. A blog reader wrote in and said they saw Damiano Dipopolo‏ on the Liquidator again the other night. This is starting to display a pattern. Many blog readers have been complaining about Hells Angels and associates appearing on that show. This is a screen cap from the latest one showing they know full well who it is and even promote him as a regular customer.

Blog readers reported that in a previous episode he was on he was caught trying to steal a pair of shoes. Sounds about right. Damiano may not have a criminal record but he is a member of a criminal organization. When he was president of the Kelwona Hells Angels they were caught in two large drug rings and a huge stolen car, boat and bike ring. Johnny Newcome was convicted of revinning the stolen vehicles for the Kelowna Hells Angels through his chop shop. Perhaps on the next episode of the Liquidator they'll have Damiano fencing stolen vehicles since that appears to be what they are promoting. It's really too bad as that was a good local show. I don't know who is putting all these Hells Angels on but perhaps they should find someone else to pick their guests.
MC & Gjengkriminalitet
MC & Gjengkriminalitet is neutral ground.This blog has NO club's affiliation, we're only here to spread the news about what´s going on in GANGLAND around the World.