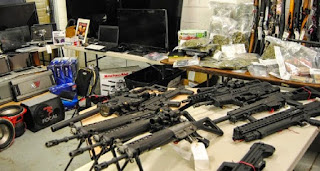 A blog reader posted a link to this story in an old blog post so I decided to repost it here for everyone to see. The original story was about a Kamloops drug bust tied to the Hells Angels. Police found and seized 15 pounds of marijuana, 10 ounces of cocaine and 40 firearms. Now it appears that the drug charges have been thrown out because they were seized from a van that left the home and they can't prove they were in the posseion of the owners of the home.

Seemingly there was sophisticated surveillance cameras on site and the defense is trying to poke holes in the police's search of the home in hopes to have the firearm evidence thrown out. The main discrepancy appears to be over how long the police waited after knocking on the door before entering. They obtained a search warrant. That doesn't appear to be in question. The question is how long did the police wait. Pretty minor given the seriousness of what was found during the search. Did they obtain a warrant? Yes they did. One of the obvious concerns in waiting too long after knocking is that you give the residents of the home time to get their guns which would be somewhat of a safety concern for the police executing the search warrant.

Seemingly one the audio of the tape one cop joking said we should throw some of the ammunition in the fireplace. He was joking. Did he do it? No he did not. That comment is simply not relevant to the legality of the search.The interesting part is the fact that the primary suspect, Mr Hillbilly Bling, was eledge to be associated with a Prince George gang called the Crew and was dealing meth, cocaine and heroine at the kiko level. As we know, the Crew in Prince George is a puppet club for the Hells Angels. Police displayed Hells Angels stickers seized from the home when they displayed the evidence at the press conference. 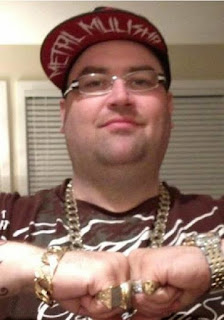 OK so this guy does indeed look like a flaming idiot. That's why the Hells Angles chose him .A guy like that simply could not make it on his own. The only way he could import multi kilos of cocaine, meth and heroin is if the was doing it with the help and protection of the Hells Angels.Please note that in addition to 40 serious firearms and drugs being seized, police also seized thousands of dollars worth of stolen electronics. This once again fits the pattern we see being repeated across the country. Hells Angels drug dealers involved with stolen property. Who's the rat now? People who steal are rats not the people that report them to the police.
MC & Gjengkriminalitet
MC & Gjengkriminalitet is neutral ground.This blog has NO club's affiliation, we're only here to spread the news about what´s going on in GANGLAND around the World.