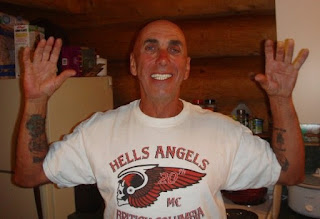 That was a pretty profound statement and it took me some thought to figure out what it meant. Kerri claimed that although there are many members of the Hells Angels who are criminals, there are many more who aren't. Take Maple Ridge for example. There are a ton of Hells Angels in Maple Ridge. Are they all involved in criminal activity? I don't think they are. I think there are a few key members who are involved in criminal activity. Unfortunately they use the name and reputation of the club to promote a monopoly on their criminal activity.

This new perspective caused me to rethink my position. I stopped supporting an overall criminal organization status and supported a case by case scenario instead. The Kelowna chapter was involved in so much criminal activity any judge that denies the seizure of that clubhouse is either an idiot or on the take. East Vancouver is a hard call. The police do have a long list of criminal activity for the court. Victoria, not quite as much. That would be a harder sell.

That's why I suggested a consent order returning the Victoria clubhouse on the condition that the Kelowna clubhouse would be seized under proceeds of crime. The East Vancouver clubhouse would have to go to trial. The Edmonton clubhouse is next to be seized because the amount of criminal activity they have been convicted of is staggering just like Kelowna. Maple Ridge, not a chance. The police would be better off doing what they are doing by seizing assets from the key players there clearly involved in criminal activity.

Recently Kim Bolan posted an update on Skeletor's trial. The crown says there is overwhelming evidence to convict him. No doubt. That's why he never made bail. His coaccused was convicted and he was the ring leader. The interesting thing in the article is the court transcript which quotes Giles who "explained that not all Hells Angels are involved in illegal activity. His words were `not everybody in the family is in the business.’ But if they are going to be involved in illegal activities that might affect the club, they have to bring it to the table and let the officers decide.”

That is a pivotal statement that speaks to the criminal organization argument and clearly establishes legal liability of the entire executive when that chapter is convicted of criminal activity. He admits that when members of a chapter are involved in criminal activity, it has to be approved by the executive. That makes them criminally culpable.

David Giles was the vice president. His statement admits that nothing he or any of their associates did wasn't approved by the entire executive. That would include the President and Sergeant at Arms as well as the Vice President. Although I know but am not *allowed* to name the president of the Kelowna chapter at the time of all that criminal activity, I can show the police and the press where to find that information conclusively. That would also establish criminal culpability in the Geoff Meisner and Brittney Irving murders. Peace.
MC & Gjengkriminalitet
MC & Gjengkriminalitet is neutral ground.This blog has NO club's affiliation, we're only here to spread the news about what´s going on in GANGLAND around the World.