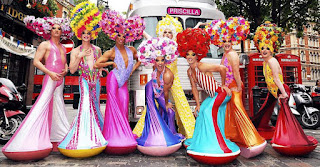 Well the new "Surrey" chapter of the Hell Angels made the news. Kim Bolan posted a picture of the Surrey Girls from an online memorial and it is indeed rather comical. They obviously used photoshop to cut and paste Larry Amero's head into the picture since he's in jail back east. His body is missing so they just have his head floating in mid air beside the other tools. He's pretty well built in real life from all the steroids he's taken but the picture makes him look like a bobblehead. Figures they'd turn their poster boy into a bobblehead after he got busted.

Out of respect to Larry's Godson I promised I wouldn't make fun of Larry any more. His Godson after all is the new Dali Lama for the gangland world. I can't say anything more now but I'm sure the day will come when you'll read all about it. I don't have a problem with Little Ryan. At least he isn't pretending to be something he isn't like the others. He's a better rapper than Weird Hal Porteous that's for sure. Randy Jones is obviously the brains of the operation.

I don't really have beef with Randy since he's just a businessman. Except for the all the cocaine he keeps bringing back from the US to be sold here as crack. I hate crack. Sell that sh*t somewhere else not on our block. We are the ones that have to live here since you all don't. The Surrey girl chapter isn't even from Surrey. They are from Whiterock and Langley.

The chapter is officially called West Point but I refuse to use that name since these clowns are everything that the real West Point stands against. That's why I call them the Surrey Girls instead. Kim Bolan is reporting that "West Point was supposed to be based in Surrey, but RCMP Asst. Commissioner Bill Fordy said at the time he would block any attempt the group made to open a clubhouse in his city. So West Point started holding its regular church meetings upstairs from a Langley pub."

Bill Fordy is so full of sh*t. What's the dancing monkey gonna do if the Hells Angels open a clubhouse in Surrey? Dance naked with toilet paper set on fire crammed up his ass again? No heterosexual male wants to see that. I guess that's his version of the Pee Wee Herman. Personally I prefer Joeski Love's version. Meeting up top a pub in Langley. Yeah right. If they were meeting in Langley they'd meet at the Whiterock clubhouse which is in Langley.

They are far more likely meeting at Tbarz in Surrey. They changed the name of Tbarz to Shakerz so it doesn't get seized in the US under proceeds of crime but nobody is that stupid. Nothing has changed. The picture I added is of them doing karaoke at Shakerz last Saturday night. They also posted a video of their coming out party on Youtube. A Hels Angels associate was stabbed at Shakerz after the name change.

Since Randy Jones is also the name of a member of the Village People, instead of calling him the Walrus we're gonna just call him Priscilla instead since he has to babysit all those drag queens. Sorry Priscilla, the Rocky Horror Picture Show is still way better.

That picture Kim posted is more like a picture of the ten little Indians. First Larry disappears after he got shot in Kelowna, then Bjorn dies on a houseboat in the Okanagan. Who's next?

Kim reported that the Hells Angels shad a large turnout for the funeral with numerous puppet clubs in attendance. The first puppets she mentioned in attendance were the the Throttle Lockers. We remember them from Kelowna. Bob Cox was the president. His son Norm was a full patch Kelowna Hells Angel. After Norman got involved in a highschool beef at Rutland high school and punched Dain Phillip's son in the head Daine chased Norm who is a lot smaller than Dain in his car. Norm was pissed he had to run and hide from Dain so he got his roommate fellow Kelowna Hells Angel Robert Thomas the larger petty thief from Ontario along with his father Bob from the Throttle Lockers and several loser associates to gang up on Dain.

Robert Thomas confronted Dain with a baseball bat and a car lead of weasel puppets and shouted out So you wanna f*ck with the Hells Angels?! Dain was unarmed, raised his hands in the air and said he just wants to talk. Thomas hit him full power with the baseball bat in the leg and Dain didn't budge. After he knocked Dain down by hitting him in the head with the baseball bat and the scared weasels jumped out of the car with hammers and beat Dain to death while he was on the ground. Real brave. That's the throttle Lockers legacy. B*tch ass weasels.

The Shadow club is beside Gus' shop in Surrey. The Jesters clubhouse is on Scott Road. Don't get me started on those geriatric clowns. Their logo literally is a clown. I kid you not. What was the Devil's Army doing there? The Devil’s Army clubhouse got shut down by the city on Vancouver Island. What kind of grown men would call themselves the Devil's Army? That is so high school. Pink handgun? They are the Devils Rejects all right. If the Horsemen Brotherhood is referring to the Teamsters Horsemen, they're awesome. They are a shot in the arm for the dying labour movement. Just what the doctor ordered.
MC & Gjengkriminalitet
MC & Gjengkriminalitet is neutral ground.This blog has NO club's affiliation, we're only here to spread the news about what´s going on in GANGLAND around the World.