Posted by MC & Gjengkriminalitet August 25, 2016
The Mongols Motorcycle Club, sometimes called the Mongol Nation or Mongol Brotherhood, is a "one-percenter" outlaw motorcycle club and alleged organized crime syndicate. The club is headquartered in southern California and was originally formed in Montebello, California, in 1969.


Law enforcement officials estimate there are approximately 1000 to 1500 full-patched members (with the expansion in Australia in 2013). The Mongols main presence is in southern California, but also all over the United States with chapters in 14 states, as well as international chapters in 18 countries. 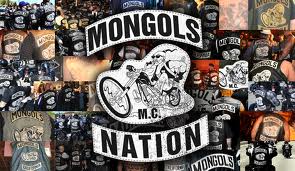 The Mongols members have had long-running confrontations with law enforcement concerning the illegal drugs trade (especially methamphetamine), money laundering, robbery, extortion, firearms violations, murder, and assault, among other crimes. Current club president David Santillan denies that the club as a whole is a criminal enterprise, and attorneys for the club state that it has changed its code of conduct to exclude drug abusers and criminals.

In 1998, ATF agent William Queen infiltrated the club, eventually becoming a full-patch member and rising to the rank of chapter vice-president using the undercover alias of Billy St. John. In April 2000, based on evidence gathered during Queen's 28-month undercover time with the club, 54 Mongols were arrested. All but one of the accused were later convicted of various crimes including drug trafficking, motorcycle theft, and conspiracy to commit murder.


In 2002, members of the Mongols and the Hells Angels had a confrontation in Laughlin, Nevada, at the Harrah's Laughlin Casino, that left three bikers dead.[13] Mongol Anthony "Bronson" Barrera, 43, was stabbed to death; and two Hells Angels — Jeramie Bell, 27, and Robert Tumelty, 50  — were shot to death. On February 23, 2007, Hells Angels members James Hannigan and Rodney Cox were sentenced to two years in prison for their respective roles in the incident. Cox and Hannigan were captured on videotape confronting Mongols inside the casino.


Mongols member Christopher Ablett turned himself in to authorities in Bartlesville, Oklahoma, on October 4, 2008 after going on the run for murdering Hells Angels President Mark "Papa" Guardado in San Francisco, California earlier that year. His bond had been set at $5 million. He was convicted of murder in aid of racketeering and three gun charges on February 23, 2012, in San Francisco.


On December 20, 2008, in Las Vegas, Mongols members arrived at "A Special Memories Wedding Chapel" for a fellow member's wedding, to find a local Hells Angels charter were just finishing up their own ceremony. It is reported by KTNV Channel 13 news, that the Hells Angels attacked the Mongols members, sending three to a hospital, two of whom suffered from stab wounds. No arrests were made and local authorities report that they are looking for suspects said to be involved in the attack.


On October 28, 2014, in San Gabriel, California, a Mongols member,David Martinez, allegedly shot and killed Pomona Police SWAT Team member Shaun Diamond. Diamond was shot in the back of the neck with a shotgun during the service of a search warrant.

Operation Black Rain was an operation by the ATF in 2008 to stop alleged criminal activity within the Mongols Motorcycle Club.


On October 21, 2008, 38 members, including Ruben "Doc" Cavazos, were taken into Federal custody after four Bureau of Alcohol, Tobacco, Firearms and Explosives agents infiltrated the group for a second time, becoming full patch members. 110 arrest warrants and 160 search warrants were issued in California, Ohio, Colorado, Nevada, Washington, and Oregon. On October 23, 2008, US District Court Judge Florence-Marie Cooper granted an injunction that prohibits club members, their family members and associates from wearing, licensing, selling, or distributing the logo, which typically depicts the profile of a Mongolian warrior wearing sunglasses, because according to the police, they use the logo and names as an identity and as a form of intimidation to fulfill their goals. Prosecutors requested the injunction after authorities arrested dozens of Mongols under a racketeering indictment.


The club president Ruben Cavazos and others pleaded guilty to the racketeering charge, and Cavazos was sentenced to serve 14 years in the penitentiary. Cavazos was voted out of the club by its members on August 30, 2008.


A planned weekend meeting in Lancaster, California, expected to draw 800 Mongols and their families, was blocked after city officials shut down and fenced off the hotel they had booked for the event, which coincides with the "Celebrate Downtown Lancaster" festival. The mayor had previously threatened to shut down the hotel over unpaid taxes if the agreement to host the Mongols was not canceled. An attorney for the Mongols said he plans to sue the city and the mayor, potentially for civil rights violations, after previously threatening to sue the hotel for breach of contract should they comply with the mayor's demands. Mayor R. Rex Parris said he wants to keep the Mongols out because they "are engaged in domestic terrorism...and they kill our children.


The television show America's Most Wanted had exclusive access to the operation, and broadcast behind-the-scenes footage of the many arrests.


After a long legal battle with the DOJ and ATF over the Mongols' MC patch, the Mongols won the rights to continued use and ownership of their patch.


In a 2015 racketeering case in Los Angeles, the Federal government tried and failed to use civil forfeiture laws to seize all rights to the Mongols emblems and patches, to forbid their members from wearing them. On September 16th, 2015, Federal District Judge David O. Carter dismissed the case. [11]

A German chapter of Mongols MC was founded in Bremen by members of the local crime syndicate run by Lebanese immigrants in 2010. It was the first time that a Muslim clan-based crime syndicate in Germany became active in the field of outlaw motorcycle clubs.[Organized crime in Bremen is dominated by the Miri-Clan, a large family of Lebanese origin with an estimated 2,600 members, who first migrated to Germany beginning in the late 1980s, and rose to national notoriety with a number of large-scale criminal activities in 2010.


According to Andreas Weber, the state of Bremen's chief of criminal investigation, the new Mongols chapter is only nominally a motorcycle group. Clan members do not have motorcycle licences and drive around the city in cars. Presumably, they are interested in associating themselves with the US motorcycle club primarily to profit from their infrastructure and trading channels in drug trafficking. The president of Mongols Bremen, "Mustafa B." accidentally killed himself with his bike as a novice licence holder briefly after the chapter's foundation. He was presumably succeeded by "Ibrahim M.", who is on record with 147 felonies ranging from grievous bodily harm to illegal possession of a weapon.

In October 2013 the Finks MC had a national meeting in Adelaide and voted to patch over to the Mongols MC. The move makes the Mongols one of the largest bike gangs in Australia with 400 members. The patch over was attributed to a need to change the culture, to move from a gang back to a motorcycle club and institute a structure whereby there were consequences for actions. Police dismissed the reasons given for the patch over as propaganda.


Mongols Alcohol, Drugs and Criminal Conviction Policy
1. Any member using, selling, transporting or possession heroin, cocaine or any other illegal drug which includes marijuana shall be automatically expelled from the club.
2. Any members convicted of any serious felony including, but not limited to, murder, rape, robbery, or burglary shall be automatically expelled from the club as soon as the conviction is final.
3. No member shall inject or be injected with any illegal drug or face automatic expulsion from the club; the only exception is a valid and proven legal medication.
4. Officers in charge at a club function shall maintain a high degree of sobriety or face disciplinary action.
5. No member shall smoke cocaine or speed. Violations will result in expulsion from the club.
6. If a Brother with a drug problem comes to the club and asks for help, rather than getting caught, an exception can be made depending on the circumstances.
7. The club is not responsible for lawyers or bail bondsmen unless a national officer has authorised it.
8. If a member knowingly acts out on his own and is arrested for guns, drugs or any illegal activity, it is not the responsibility of the club to provide a lawyer or a bail bondsman for his actions.