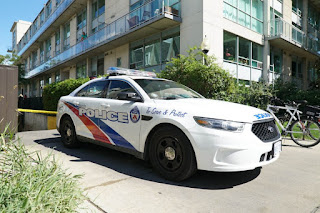 The Toronto Star is reporting that "Man dies after being found shot in Toronto condo parking lot. A male motorcyclist found with gunshot wounds was pronounced dead by paramedics Sunday afternoon in a condo parking lot in the King W. area. Police have since said it is crime related and are investigating." CBC is reporting that the victim sustained multiple gunshot wounds.

The Globe and mail is reporting that "officers at the site were seen addressing a group of seven men outside the building. The men were seen embracing, visibly emotional, as they spoke to police, but refused to comment. It was unclear whether any of them were residents of the building." The night before there was another shooting in Toronto after a dispute in a resturant.

Update: City News is reporting that A brazen daytime shooting on King Street West that left a motorcyclist dead may have ties to biker gangs. A police source told 680 NEWS the victim is the son of a prominent biker gang member and that this may have been a targeted hit. The shooting happened in a condo garage at King Street and Strachan Avenue around 12:30 p.m. on Sunday. John Ignagni, 33, of Toronto, was killed, police said Monday.