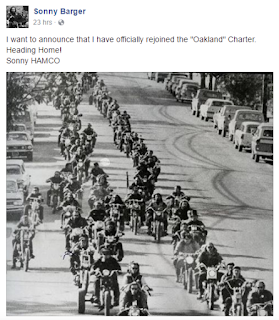 Sonny Barger is announcing that he has officially rejoined the Oakland chapter and is heading home with the pimps and baby killers. That's where his pal Otis Garrett is from. Otis was convicted of running a prostitution ring for the Hells Angels out of a brothel called the Love Nest in San Francisco. Later Otis was convicted of ordering the murder of Margo Compton and her twin seven year old daughters for testifying against him. Sonny attended his pal's trial and later recognized him as a member of the Filthy Few Fellowship in the Big House Crew. 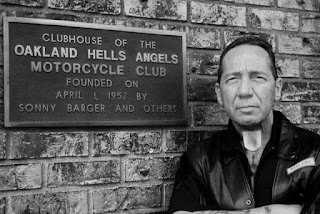 Sonny Barger claims that he founded the Oakland chapter along with a few others. One of the founders of the Ventura chapter was George Christie who was a strong leader in the club for many years until Sonny had him kicked out so he could return home. George Christie's perfectly healthy son died in his sleep from unknown causes. He was the Vice President of the Ventura chapter. They claimed Christy cooperated with law enforcement. Where have we heard that before? Falsely accusing a political opponent of being a rat to promote yourself. Bastards.

Just for the record the Hells Angels started in San Bernardino not Oakland. George Christie was a member of the Hells Angels in Los Angeles before Sonny Barger started the Oakland chapter. I can assure you George Christie has never testified against any other member of the club nor has he ever cooperated with law enforcement. The claim that he has is a bold faced lie.

George Christie has come to a similar conclusion as I have through the nudging of Kerri Krysko. George claims the Hells Angels are not a criminal organization. He agrees there are criminals in the Hells Angels but claims that the club is not a criminal organization simply because the criminals in the club are stingy and dont share their proceeds of crime. That is believable.

George Wethern was the former Vice-President of the Oakland Chapter. In his book A Wayward Angel he claims: "The Oakland Angels began issuing new charters and assisting chapters set up their own drug operations. The additions were designed to contribute to our image and business concerns, by providing a drug route link, manufacturing a drug, supplying chemicals, or distributing drugs in an untapped area." 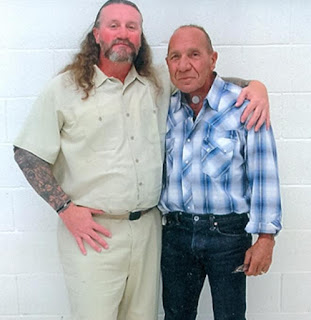 Fast forward to 1995 when Gregory Domey, former president of the Salem Chapter of the Hells Angels, and former East Coast President of the organization pled guilty to multiple drug charges and was sentenced to 20 years in prison under the "Drug Kingpin" statute.

According to court records, Domey and his codefendants sold cocaine and methamphetamine, from various locations including their Hells Angels Club House headquarters in Lynn, which was protected by members who served as armed guards and by surveillance cameras. Domey and his codefendants sold the drugs to undercover agents and confidential informants on dozens of occasions, many of which were electronically recorded and/or observed by surveillance agents.