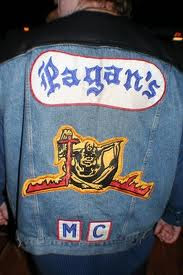 Three members of the Pagan motorcycle gang are in jail after an alleged assault on a rival biker gang member Sunday in Washington Township.


The alleged victim, Ernest Gill, was transported to a hospital by medical helicopter with severe bleeding to his head and face, police said.


He told police he was riding his motorcycle wearing an Iron Order motorcycle club shirt when a group of bikers and a gray Chevrolet Malibu pulled out of Pizons bar on Monessen Street in Belle Vernon and began to follow him. He said they stopped him at the intersection of Hollywood Street and Koslasky Drive, beat him and stole his handgun, cellphone and biker club shirt.﻿