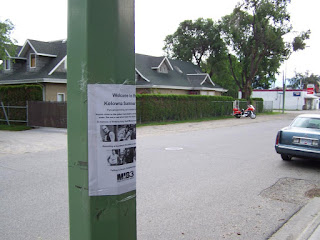 The Kelowna Hells Angels clubhouse is in the news again. Kelowna Capital News is reporting that "Mounties arrested one suspect and seized property after a Tuesday afternoon raid of the Hells Angels clubhouse on Ellis Street. The Kelowna RCMP, partnered with officers of the Alberta Law Enforcement Response Teams (ALERT), executed a search warrant just after 1 p.m. on the property in the 800 block of Ellis Street. 'Investigators have seized a travel trailer, allegedly reported stolen in Alberta, from the property and arrested a 50-year-old Alberta woman found inside that trailer,' said Const. Jesse O'Donaghey, in a press release. 'Investigators have also seized evidence from inside the residence as part of the ongoing investigation.'"

I am thrilled to hear that the Kelowna RCMP teamed up with ALERT, the Alberta Gang Task Force. After the huge success of the Kelowna Summer Jam in 2012, the Christy Clark government dismantled the BC Gang Task Force and cut funding making it compromised just like the Edmonton Police Service. Every time a police task force found organized crime, a government body dismantled that police task force. That is exactly what has happened to the OMGU and the BC Gang Task Force. ALERT has been doing a great job busting the Edmonton Hells Angels despite the fact that the EPS has been compromised for many years.

No doubt being in possession of stolen property will not help their case to keep their clubhouse in the court application to seize the clubhouse under proceeds of crime. Like I said they should just hand over that clubhouse as a consent order before they establish bad jurisprudence in the court system because that one is a lost cause. The Kelowna Hells Angels were involved in so much criminal activity only and idiot or a corrupt judge like Peter Leask would deny that application.
MC & Gjengkriminalitet
MC & Gjengkriminalitet is neutral ground.This blog has NO club's affiliation, we're only here to spread the news about what´s going on in GANGLAND around the World.