He’s an Outlaw. He’s a firefighter. And now he’s a wanted man

A Hillsborough County firefighter who belongs to the Outlaws motorcycle club is wanted by Key West police who say he took part in a barroom brawl in September during the annual Bike Week.

Key West police on Wednesday said they issued an arrest warrant for Clinton Neal Walker, 33, after he was captured on security video at Rumor Lounge, 430 Greene St., repeatedly punching a man in the face on Sept. 27.

According to the initial police report, at about 3:20 a.m., about 15 men wearing the colors of the Outlaws Motorcycle Club — one of the world’s largest biker clubs — began attacking bar employees following an argument between one Outlaw and the bar owner.

The bar’s owner and an employee each suffered a swollen eye and bloody lip, after police said one Outlaw ordered the owner to eject a woman from the bar “before there was a problem.”

“Detectives contacted the Hillsborough County Sheriff's Office and confirmed Walker’s identity,” Crean said in a statement. “A warrant for Walker's arrest has been issued for the charge of battery.”

Along with the Hell’s Angels and the Sons of Silence, the Outlaws are on the U.S. Department of Justice’s shortlist of so-called “outlaw motorcycle gangs,” whose members engage in criminal activity. The bikers call their outfits clubs.

In a May 2016 interview with WFTS television news in Tampa Bay, Walker said he is proud of his Outlaws membership and disagrees with the federal government labeling them criminals.

Walker, of Bradenton, has been in the news after he was arrested May 7 on suspicion of felony battery on a law enforcement officer, and in video of the incident, he can be seen falling to the floor from being stunned with a Taser by police, according to the Tampa Bay Times.

After hitting the ground, Walker is seen on tape being kicked in the groin by an officer. Walker is now suing the St. Petersburg Police Department over the incident. 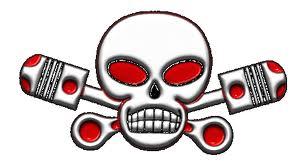