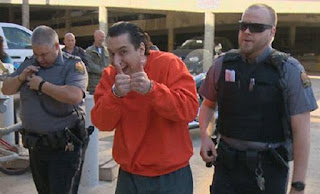 Global is reporting that Josh Petrin has been found guilty of first-degree murder in the shooting death of Saskatoon mother Lorry Santos. Petrin was also found guilty of conspiracy to commit murder. Last Month CBC reported that A Crown witness says that accused killer Josh Petrin came to Saskatoon four years ago to oversee the murder of a man who had left the White Boy Posse gang. Instead, the hitmen he recruited went to the wrong house and killed Lorry Santos. The witness said Petrin wanted to kill T.J. Cromartie, who had left the gang and moved to Saskatoon. The man said that Petrin wanted them to "blast" Cromartie after leaving because, "The only way out is in a body bag."

The court got this one right. My sources claim that Josh Petrin was the one calling the shots in this murder. He was also charged in the murder of Mitchell Chambers and Bryan Gower for a drug debt. Josh Petrin's coaccused James O’Hagan was also charged in the murder of Bob Roth who was decapitated for a drug debt. Randy took the fall for Josh in Brian's murder. O Canada dot com reported that the motive behind the murders was rivalry, discipline or debt-collection.

All of these convicted murderers were members of the Whiteboy Posse who sold drugs for the Edmonton Hells Angels. Josh was close friends with Sean Jackson aka Fat Mike. Josh got all the product from him. Sean was supplied by the Hells Angels.

This conviction is a step forward because it holds the person who ordered the hit accountable. The next step up the food chain would be to hold Sean Jackson accountable. Dominic DiPalma was the member of the Hells Angels who oversaw all that violence and has already been convicted of cocaine trafficking for supplying the Whiteboy Posse just like I originally reported.

The key thing to see here is that all this violence was the result of one group obtaining a monopoly on the drug trade. This wasn't rivals fighting over the drug trade. This was one group that used ruthless violence to discipline people for leaving or for collecting drug debts. Similar to some extent to what's happening here in Metro Vancouver now.
MC & Gjengkriminalitet
MC & Gjengkriminalitet is neutral ground.This blog has NO club's affiliation, we're only here to spread the news about what´s going on in GANGLAND around the World.