Posted by MC & Gjengkriminalitet November 03, 2016
A man accused of killing two men during a fight outside a Birmingham motorcycle club two years ago began his trial on Tuesday.


James Armstrong, 29, is charged with murder in the August 31, 2014, deaths of Stevens Hicks and Wilbert Hawkins (link is external). Armstrong allegedly shot the two men during a gunfight outside Showstoppers Motorcycle Club on Coosa Street.


Two others were wounded in the crossfire. Armstrong, of Griffin, Ga., was arrested in Georgia a few weeks after the incident. According to court records, Armstrong caused the deaths of Hicks and Hawkins by shooting Hicks in a crowded location "causing a cross fire of gunshots which struck various individuals including Wilbert Hawkins."


Hicks, 48, was a member of Wheels of Soul Motorcycle Club; Hawkins, 47, a member of Showstoppers. The fight happened on a Sunday night gathering at the motorcycle club, which was routinely hosted at Showstoppers after a day of racing.


Kenya Hicks, Stevens Hicks' wife, took the stand Tuesday and identified Armstrong as the person she saw shoot her husband. Kenya said she and Stevens went to the Comedy Club earlier in the evening and then went to the Wheels of Soul Clubhouse. The couple was celebrating her birthday, and Stevens "wanted to take [Kenya] out for a drink."


They rode to the Showstoppers club, along with two other members of the Wheels of Soul, after inviting some friends to go to a bar. Someone called Stevens and said the Outcast group was causing trouble at Showstoppers, so Stevens decided to go there first. 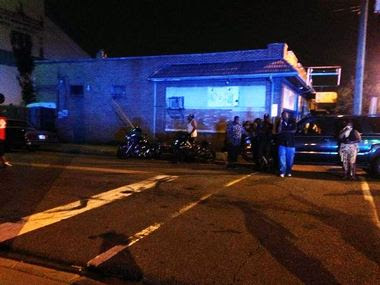 
James Armstrong, 27, of Griffin, Ga., had a hearing this morning before Jefferson County Circuit Judge Stephen Wallace. The judge informed Armstrong of the charge against him and that he is being held without bond in the Jefferson County Jail.

Once the couple arrived, Kenya said, Stevens was greeting friends when another man came up and shot him.
"I noticed his ears," she said about the shooter. "It was too close... it changed my life."
Kenya said the shooter had short hair and was wearing black clothing with white writing on the shirt. She claimed the shirt's writing is a sign of the Outcast club.


Kenya said that another member of the Wheels of Soul club, whom she identified by his biker name "Rock," texted her days after the shooting and asked if she could identify the man who killed Stevens. She said yes. Rock then sent a photo of Armstrong, and Kenya recognized him as the shooter.


Deputy District Attorney Blake Milner showed the court a picture of the text message and of the photo.


Emory Anthony, a defense attorney representing Armstrong, said Kenya never told police that she had seen a photo of Armstrong before identifying him in a photo lineup. She also never identified the person who had sent her the text message, he said.
"I feared for my life," Kenya said when questioned about not giving those details to police.
"...I don't have any doubts," she said emotionally.
Jefferson County Circuit Judge Stephen Wallace is presiding over the trial.


Kenya said she has post-traumatic stress disorder, and told Anthony she could not recall some details, including parts of police interviews.


Anthony also said that Kenya originally told police the man who shot her husband was bald, shorter and smaller than Stevens, and was not wearing any clothing that signified he was in the Outcast club.
He said Kenya did not give police any information about the other Wheels of Souls members who were present the night of the shooting.