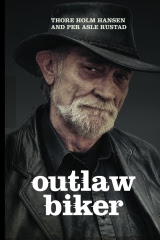 This book provides documentary proof of a CIA double-cross and government cover-up spanning 30+ years thus far, and the history behind all of their criminal acts in an attempt to prevent this scandal from coming to light. With the publication of this book, Thor's children and grandchildren living in the US may finally be able to look people in the eye whenever his name is mentioned, rather than forced to bow their heads in shame as it has been up to now.

Thor Holm Hansen has lived a life few people would dare or care to embark upon, including over 40 years with the Outlaws MC both in the US and Europe. Even after winning a $15,000,000 civil suit against the CIA in 2002 for having orchestrated his arrest and conviction, In Absentia, for the alleged possession of 37 gram cocaine in 1981, where he proved that even the judge and prosecutor were part of this conspiracy, confirmed in a ruling by the court of appeals, the district court still refused to vacate the conviction on grounds that evidence obtained in a civil matter cannot be used to attack a criminal conviction??? And was forced to serve 7 years in federal prison on a bold-faced lie. Heads will roll now!

He is also a well-known recording artist in his homeland, Norway, having released a number of records between 1982 and today, where his latest "Hell on Two Wheels-Revisited" has added a couple of recordings he did together with Dr. Hook-Ray Sawyer in 1988, which only recently came to light, being lost for 22 years. See the video on www.youtube.com.

He is also a mechanical engineer, with several revolutionary patent-pending innovations, such as his concept for a horizontal launching pad for the space ferry; A high-speed elevator without weights and counter-weights; A belt-drive conversion system for all 4x4 vehicles, and the list goes on and on.

Read his incredible life story, including gang wars and assassination attempts against him both in the US and Europe; training mercenaries to remove Baby Doc in Haiti; and the repeated attempts by misguided prosecutors to orchestrate his convictions on everything from rape to First Degree Murder, luckily to no avail, where the refrain from his latest CD says it all; "I've been shot at, I've been shafted, I've been set up by the feds. But with brains and balls, I beat them all. Yet life's been hell, (of a lot of fun) On Two Wheels".