Rock Machine, or Rock Machine M.C., is an international outlaw motorcycle club with six Canadian chapters, six US chapters and eight chapters in Australia. It was formed in 1986 by Salvatore Cazzetta, a former friend of Hells Angels Quebec chapter president Maurice Boucher, and competed with the Hells Angels for the street-level drug trade in Montreal. The Quebec Biker war saw Rock Machine form an alliance with a number of other gangs. The conflict occurred between 1994 and 2002 and resulted in over 160 casualties and an unknown number of injuries. 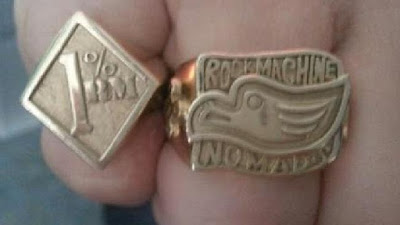 When the Rock Machine became a probationary chapter of the Bandidos motorcycle club in December 2000, after being an official hangaround club for eighteen months, Bandidos national officer Edward Winterhalder was put in charge of overseeing the transition by Bandidos international president George Wegers. The original version of the Rock Machine (1986 to 1999) in Canada changed their colors from black and silver to red and gold in May 1999; their colors remained red and gold until they became Bandidos in December 2000. After the few remaining Bandidos members in Canada quit the organization and Bandidos Canada was dissolved, ex-members of the Mongols and the Bandidos reformed the Rock Machine in 2007, adopting the original black and silver colors as their patch. As of 2008, the latest incarnation of Rock Machine claims to be a club of motorcycle enthusiasts that is not involved in criminal activity. 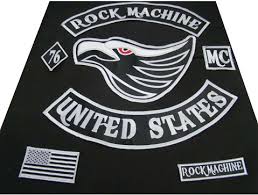 Early history
In approximately 1982, Salvatore Cazzetta was a member of the "SS", a white supremacist motorcycle gang based in Pointe-aux-Trembles, on the eastern tip of the Island of Montreal. Fellow SS member Maurice Boucher became friends with Cazzetta and, as leaders of the gang, the pair became candidates to join the Hells Angels when the gang expanded into Canada.


A Lennoxville, Quebec chapter of the Hells Angels suspected in March 1985 that the Laval chapter was interfering with drug profits through personal use of products intended for sale. It is believed that the Laval chapter's invitation to a Lennoxville chapter party led to the ambush and death of five Laval members. Divers located the decomposing bodies of the victims at the bottom of the St. Lawrence River, wrapped in sleeping bags and tied to weightlifting plates, two months after the party. The event became known as the Lennoxville massacre, and its extreme nature earned the Quebec chapter of the Hells Angels a notorious reputation. Cazzetta considered the event an unforgivable breach of the outlaw code and, rather than joining the Hells Angels, in 1986 formed his own smaller gang, the Rock Machine, with his brother Giovanni.

Future Rock Machine leader Fred Faucher later said, "Sal once told me, 'Those guys [Hells Angels], they operate their club in such a way that I didn't want to join them'". Rock Machine members chose not to wear Hells Angels-style leather vests that could easily identify members, and instead wore rings displaying an eagle insignia. The official Rock Machine club motto is "A La Vie A La Mort", or "To the Life To Death".


Boucher, after finishing a forty-month sentence for armed sexual assault, joined the Hells Angels and was subsequently promoted within the club's ranks. The Hells Angels and Rock Machine co-existed peacefully for many years, a situation that, according to police officials, was due to Boucher's respect for Cazzetta and the latter's connections with the Quebec Mafia, the only organized crime group that the motorcycle gangs were unwilling to attack.

Main article: Quebec Biker war Cazzetta was arrested at a pitbull farm in 1994 for attempting to import eleven tons of cocaine. Recently promoted Hells Montreal president Boucher began to increase pressure on the Rock Machine shortly after the arrest, which initiated the Quebec Biker war. The much smaller gang Rock Machine formed an affiliation, "the Alliance", with Montreal crime families such as the Pelletier clan and other independent dealers who wished to resist the Angels' attempts to establish a monopoly on street-level drug trade in the city. A violent turf war ensued with the Hells Angels.


Boucher organized "puppet clubs" to persuade Rock Machine-controlled bars and their resident drug dealers to surrender their illegal drug business. Rock Machine resistance led to bloodshed. Two members of the Hells Angels' top puppet club entered a downtown motorcycle shop on July 14, 1994, and shot down a Rock Machine associate. "That was the beginning of the war," Ouellette said.


A Jeep wired with a remote-controlled bomb exploded that August, killing a Rock Machine associate and an 11-year-old boy, Daniel Desrochers, who was playing in a nearby schoolyard. The first full Hells Angels member was shot to death entering his car at a shopping mall a month later. Nine bombs went off around the province during his funeral."


This turf war prompted the Rock Machine to align itself with the Bandidos motorcycle club from Texas. Ten individuals allegedly displaying Rock Machine colours were spotted on July 21, 2011, in a downtown Montreal strip club, the location where a Rock Machine leader had been savagely beaten 10 years previously by Hells Angels associates.

After the 2006 massacre that claimed the lives of eight prominent Bandidos at a farm house in Shedden, Ontario, the Bandidos Canada closed its doors officially in October 2007. Infighting, lack of support from US and European Bandidos, and the Canadian members' suspicions about their US counterparts' involvement in the Shedden murders led to the closure.


The Rock Machine was reopened in early April 2008 by several disgruntled members of the now-defunct Bandidos Canada "No Surrender Crew", who reorganized it as the Rock Machine Canada Nomads. The move was intended as an insult towards the Bandidos US national chapter and Bandidos National President Jeffrey Pike in particular, but gained unexpected momentum. The club spread across Canada and over several countries including the United States and Australia.


The new Rock Machine maintains an enmity towards the Texas-based Bandidos, despite claims in Alex Caine's book The Fat Mexican that Rock Machine members in 2008 made a secret deal with high-ranking members of the Bandidos national chapter to re-open in Canada. The club says that it now dismisses members who are involved in any known crimes or criminal activity.[


The Rock Machine was absorbed into the Bandidos motorcycle club in 2000, in a patch-over ceremony overseen by high-ranking Bandidos member Edward Winterhalder. They remained Bandidos for seven years. Many Rock Machine members at the time joined their former arch-enemy, the Hells Angels, due to the Bandidos' refusal to grant full status to junior-patched members of the Rock Machine.


High-profile members who defected to the Angels included Paul Porter, Nelson Fernandes and Bruce Doran, who joined the Nomads chapter of the Quebec Hells Angels. Fernandes died of cancer within months of becoming a Hells Angel. Doran turned in his colours and returned to private life, but some members of the law enforcement community believe he is still very active and merely uses his resignation as a cover to continue his involvement without the scrutiny of police.

A Rock Machine chapter was established in the Perth suburb of Myaree in 2009.The defection of a Rebels MC member to the Rock Machine sparked an ongoing violent feud between the gangs in Perth.


The club received negative publicity when an associate Stefan Pahia Schmidt was charged with murder after throwing a pub patron through a window with a seven-metre fall. It is alleged that Schmidt was present with other Rock Machine members when the victim spoke with two women from the Rock Machine group.


In 2013 history had repeated its self again. After talks with the Bandidos MC, the then Rock Machine President "Shaneo" had brokered a deal for all standing members in Australia and New Zealand to patch over too the Bandidos MC. All active members patched over to the Bandidos MC. Members that did not want to patch over, retired from club life and went back to their private lives.