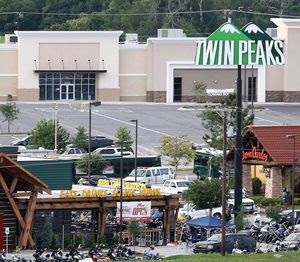 A judge on Friday effectively postponed the start of any Twin Peaks biker trials in McLennan County until after the federal trial of Bandidos national leaders in San Antonio or until federal prosecutors agree to share evidence with McLennan County District Attorney Abel Reyna.


Judge Matt Johnson of Waco's 54th State District Court granted a motion to delay the June 5 trial of Kyle Smith, 50, an air-conditioning technician from Kilgore and member of the Cossacks motorcycle group. Johnson's ruling comes in the wake of Reyna filing a letter he got last month from U.S.

Attorney Richard Durbin, of San Antonio, telling him that federal authorities prosecuting the Bandidos have information that relates to Twin Peaks cases but won't share it with Reyna's office until the federal trial is over. That trial is set for August, but Durbin's letter said it could be postponed until later this year or early next year.

Judge Ralph Strother of Waco's 19th State District Court is also hearing Twin Peaks cases. While no attorneys for bikers have filed motions to postpone trials in his court, Strother said the situation with the federal evidence effectively has done that.
"I don't think we can move forward in any of our cases until some kind of resolution or understanding is reached regarding the situation with the federal indictment in San Antonio," Strother said. "It has effectively put a barrier between our ability to proceed with our cases. I don't   think the presence of a pending motion (for continuance) is what is causing the problem. It is the presence of the federal indictment out of San Antonio that is the issue."

Sherman attorney John Hunter Smith, who represents Kyle Smith, told Johnson he doesn't want to go to trial if federal authorities have evidence that is favorable to Kyle Smith's case. He also said he has not been given evidence from DNA testing done on his client.

Prosecutor Michael Jarrett said the DA's office is waiting for the return of DNA evidence from a state lab, where it is being analyzed and tested. Reyna told the court that he could not "in good faith" oppose Smith's motion for continuance because of what Durbin said in his letter. Reyna said he has contacted the offices of U.S. Sen. Ted Cruz, U.S. Sen. John Cornyn and State Sen. Brian Birdwell to see if they can serve as intermediaries between his office and Durbin's in an effort to free up the federal evidence sooner.

Reyna said he would update the court if the lawmakers have success with federal officials.
Johnson also canceled a jury panel Friday that was scheduled to report May 5 to fill out questionnaires for Smith's trial.

In filings last month, Reyna notified the court of his communication with Durbin. He said that although federal authorities made no specific evidence disclosures, it is his duty under the Michael Morton Act and other statutes to make defense attorneys in the Twin Peaks cases aware that the information exists.
"Although the federal investigation was underway when that incident occurred, neither the fact of the investigation nor any information pertaining to the investigation were shared with this office,"

Reyna's filing states. "The federal indictment was obtained under seal, and it was not until it was unsealed and reported by the media that the McLennan County Criminal District Attorney's Office became aware of the existence of the federal investigation."

While Durbin's office and Reyna's office have not coordinated their efforts in the separate investigations, Durbin said his office has evidence that relates to the Twin Peaks incident.
"Because of our limited knowledge of your cases, we cannot express an opinion on whether our information would be admissible in your prosecutions, nor whether it is clearly incriminating to some of your defendants, or exculpatory of others," Durbin wrote. "It is possible that there may be some of both given the number of defendants charged in your cases."

The federal indictments resulted in the arrests of three top Bandidos leaders and include allegations from incidents before and after May 17, 2015. The charges do not specifically mention the Twin Peaks incident, which is thought to be the result of escalating tensions between the Bandidos and Cossacks.
"As I explained, we and federal investigators have invested considerable time to obtain evidence through complex and expensive techniques to reach the highest levels of the Bandidos organization," Durbin wrote. "Because of the significance of this prosecution, I have no choice except to maintain control over litigation relating to that information and evidence until we have completed our prosecution."