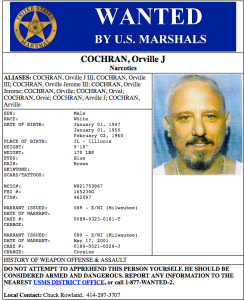 One of Chicago’s most wanted fugitives — Outlaws Motorcycle Club member Orville Jerome Cochran — was arrested over the weekend in a southwest suburb for shoplifting, police said Monday.

Cochran, who once worked at McCormick Place, is charged in a federal racketeering case that involves allegations of drug dealing, bombings and two murders by members of the Outlaws Motorcycle Club.

Cochran was arrested in Evergreen Park just before 5 p.m. on Sunday. He’s accused of stuffing a back brace into his pants at a Meijer store and walking past the check-out counter, said Capt. Peter Donovan, a spokesman for the Evergreen Park Police Department.

A spokeswoman for the marshals service said Cochran was taken into federal custody on Monday and faces charges in Milwaukee. He’s expected to appear in federal court in Chicago on Tuesday.
In 2001, Cochran was indicted in Milwaukee with five other Outlaws members in a federal racketeering case. His co-defendants have been convicted and were sentenced to terms ranging from six years to more than 13 years in prison for their roles in a drug conspiracy.

Cochran and two of his co-defendants were accused of being involved in the fatal stabbing of Michael “Mad Mike” Quale, a member of the rival Hells Angels motorcycle club, during a fight at a Lancaster, N.Y., speedway in September 1994. A member of the Outlaws was shot to death in the melee.

The indictment also alleges Cochran was involved in the March 1995 killing of Jack Castle.
Cochran was shot in 2000 outside the Outlaws’ clubhouse near 25th and Rockwell on the Southwest Side. After he was indicted in 2001, he went on the run and was thought to be out of state for a time, harbored by fellow Outlaws or their sympathizers, sources said. It’s not clear where Cochran was living recently. He gave authorities an Illinois address, according to the marshals’ spokeswoman, who would not say where exactly that was.

The Hells Angels have a clubhouse in Harvey. In the 1990s, the Outlaws fought fiercely to keep the Hells Angels out of the city of Chicago. For years, the Outlaws have had two clubhouses in Chicago: the one on Rockwell and another at 3745 W. Division on the Northwest Side. They recently told that building.

Federal agents had raided the clubhouse on Division Street in 2008 after ranking Outlaws member Mark Polchan was arrested for plotting the bombing of a Berwyn video poker business. A mobster, Michael “The Large Guy” Sarno, wanted the business destroyed in 2003 to protect his gambling interests, prosecutors said.