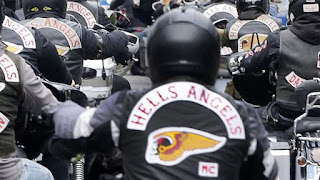 A man was killed in a Riverside gas station shooting possibly involving what appeared to be members of the Hell's Angels motorcycle gang.

Officers responded to a call of a shooting at a Shell gas station at 3502 Adams Street in Riverside shortly before 10:30 p.m. Sunday.


A gas station employee, who made the 911 call, said the gunfire took place directly in front of gas pumps, Riverside police said. Once patrol officers arrived, they found a man suffering from what appeared to be a gunshot wound. Emergency crews from the Riverside Fire Department provided immediate medical aid and transported the victim to the Riverside Community Hospital, where he later died from his injuries, police said.

The victim's identity was pending a coroner's investigation.
Men wearing jackets from the Hell's Angels motorcycle gang were spotted at the scene being questioned by police, but authorities did not disclose whether they were suspects in the shooting.

Detectives from the Robbery - Homicide Unit and the Gang Intelligence Unit were investigating.