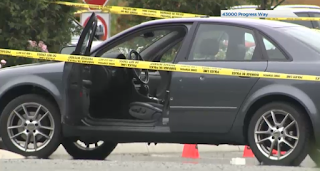 The Vancouver Sun is reporting that "The man shot Friday morning in Chilliwack has been identified. Police say Yee Hung (Roland) Chin, 33, died in hospital after being shot in the 43900 block of Progress Way. His death is being treated as a homicide and the Integrated Homicide Investigation Team is now investigating. Chin had most recently lived in Chilliwack and was known to police. Chin had an extensive criminal history in Calgary. He was a member of the FOB gang in Calgary; his brother Roger was killed in 2008. More than two dozen deaths were connected to a long-running gang war with their rivals, the FOB Killers."

CBC is reporting that "Police say a Dodge Caravan was set on fire shortly after the shooting and two other vehicles - described as a white sedan and a dark sedan - were spotted fleeing the site of the burning van."

The Abby News is reporting that: "For the past year Chin has lived in Chilliwack, according to some who knew him. He went by Jason, rode a motorcycle, was a personal trainer and apparently went to church."