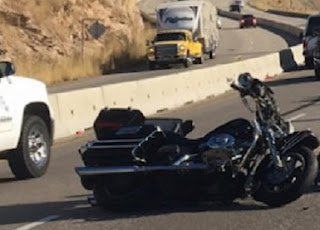 There have been several motorcycle accidents over the weekend. Castanet is reporting that there was a motorcycle accident on Highway 97 near Bailey Road on the way to Vernon from Kelowna yesterday afternoon. KISS-FM reported that a truck slammed on his breaks to avoid hititng a deer and the motorcycle crashed into the back of the truck.

Global reported that on a fatal motorcycle accident in West Kelowna. "The 37-year-old man died in hospital after his motorcycle collided with a pickup truck at the intersection of Highway 97 and Elk Road in West Kelowna Wednesday night." Witnesses claim speed may have been a factor.

Durham Radio News is reporting that Durham police say a collision between a vehicle and motorcycle in Oshawa sent the motorcycle rider to hospital. They say the driver of the vehicle tried to make a left hand turn just before 8 p.m. Saturday from the centre lane of Simcoe Street near John Street, resulting in the crash. The driver of the vehicle has been charged with careless driving, while the motorcycle rider is in stable condition.

One blog reader who witnesses the accident in Ontario claims the motorcyclist was wearing HA colors with an Ontario rocker. Shortly after a bunch of guys showed up that were wearing "Redline" patches with a "Durham" rockers.