Satans Choice MC back in Canada? 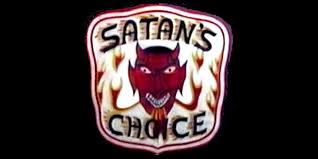 Satan's Choice MC was a Canadian outlaw motorcycle club that was once the dominant outlaw club in Ontario, and at the peak of its power in 1977, had 12 chapters based in Ontario, with one in Montreal, Quebec. However, its power began to diminish during the 1970s, with some of the clubs chapters "patching over" to the Outlaws MC in 1977. The remaining chapters would eventually become members of the Hell's Angels along with most of the other major outlaw clubs in Ontario.

The founding chapter of the first iteration of Satan's Choice was established during the late 1950s in Toronto, usually hanging around "Aida's", a downtown restaurant. This version of Satan's Choice was small in size, only numbering about 45 members, and had a very casual, non-criminal focus at the time. This club would disband in 1963, but went on to serve as the namesake for a group of four other motorcycle clubs which came together as the new Satan's Choice in 1965, namely the Phantom Riders, the Canadian Lancers, the Throttle Twisters, and the Wild Ones. Former Phantom Riders president Bernie Guindon would become the president of this newer, larger version of Satan's Choice, and would later become their national president as the group expanded. The group regulated itself somewhat differently from most motorcycle clubs such as the Hells Angels, using a series of bylaws instead of a single written constitution or charter.

This new Satan's Choice started out much the same as the original, a group of young men simply wishing to escape from society and its rigid norms and expectations. Satan's Choice members were not serious criminals, if they committed any crimes at all. However, towards the end of the 1960s and into the 1970s, the group slowly developed into an outlaw motorcycle club as a result of the large potential profits from criminal activities. While they were involved in a number of criminal activities that were typical for biker gangs, such as robbery, theft, assault, and running prostitution rings, they were notably deeply involved in drug production and trafficking. The club operated a number of drug labs out of remote cabins in Northern Ontario, with production focusing especially on PCP and methamphetamines, better known in the area as "Canadian Blue". This success emboldened elements of Satan's Choice, in particular their Toronto chapter, into sparking a gang war with two rival Toronto biker gangs, the Black Diamond Riders MC and the Vagabonds MC. However, the rest of the group's chapters met and ended the war, making peace with the two rival groups and disciplining the leaders of the Toronto chapter. During this time period the Satan's choice had grown rapidly, reaching their peak strength in 1977, with about 200 members across 13 chapters in Ontario and Quebec.

Alliance with the Outlaws MC

In 1975, Satan's Choice began an alliance with the Outlaws MC, one of the largest international outlaw motorcycle clubs. The benefits of such a relationship worked to the advantage of both groups. Satan's Choice gained access to a larger support network of clubs throughout the United States and beyond, opening the club to new business opportunities and possibly even reinforcements in the event of another club war. Meanwhile, the Outlaws gained a strong presence in Ontario, precluding any expansion by the Hells Angels into the region. Furthermore, the Outlaws gained a way to challenge the supremacy of the Hells Angels in Quebec through access to the Montreal chapter of Satan's Choice. This led the Montreal chapter and their Outlaw allies into open conflict with the Hells Angels-backed Popeyes MC, resulting in a number of casualties on both sides. Not long after this, in 1976, the club's leader Bernie Guindon would be incarcerated on drug charges, further diminishing the gang's power. This would soon lead to the fracturing of newly weakened Satan's Choice, when in July 1977, the Ottawa, St. Catherines, Windsor, and Montreal chapters fully abandoned Satan's Choice in favour of the much larger Outlaws.

In the decades following the alignment of Satan's Choice with the Outlaws, particularly the late 1980s and 1990s, the club would eventually find itself falling into a steady decline in both numbers and influence. One of the reasons for this was a renewed effort by law enforcement, particularly in Ontario, to prosecute the club for their criminal activities. An early example of this was a series of police raids in 1984 that seized two small-caliber handguns, marijuana & marijuana oil, and a small amount of cocaine from 4 private residences in Scarborough. Rival gangs would also begin to target the club, as evidenced by the bombing of the Satan's Choice clubhouse on Kintyre Avenue in Toronto in 1995. Making matters worse, the club was in just the next year targeted by a major police operation dubbed Project Dismantle, which involved almost 300 officers from the Ontario Provincial Police, as well as the municipal police forces of Halton, Durham, Hamilton-Wentworth, Waterloo, Sudbury, and Metropolitan Toronto. The result of the raids included the seizure of marijuana plants and hydroponic equipment valued at 11 million dollars, as well as more than $125 000 cash and over $265 000 worth of other drugs including Cocaine. The police forces also seized a variety of firearms, including 12 handguns, 5 non-restricted rifles, and 7 restricted weapons such as automatic pistols, sawed-off shotguns, and even machine guns such as a World War 2-era Bren gun and tripod. In Sudbury the operation specifically targeted the local chapter of Satan's Choice and members of the Hamilton chapter, which all but wiped these chapters out. This specific part of the operation involved a police surveillance operation that caught the members of the club discussing the bombing of a strip club who had disrespected several members of the club.[ Many of the members of these chapters found themselves in prison or otherwise leaving the club, with the Sudbury chapter being reduced to just 3 full members from the peak of 8 members and 2 "hangarounds". Unfortunately for those involved with Project Dismantle, no convictions were ever given as a result of the charges and arrests stemming from this operation. This was partly as a result of most of the wiretap evidence being excluded after Justice John McDonald of the Ontario Superior Court found that a senior OPP detective lied to five different Superior Court justices to get the wiretaps approved in addition to destroying other evidence.


Alliance and merger with the Hells Angels
The arrangement with the Outlaws also resulted in Satan's Choice becoming a target of the Hell's Angels, who happened to be the Outlaws' main rivals. The Hells Angels had for decades been prevented from expanding into Ontario by the Outlaws and their Satan's Choice allies. However, after the chapters in Ottawa, St. Catherines, Windsor, and Montreal abandoned Satan's Choice for the Outlaws, the two groups drifted apart. The Outlaws would later find their Ontario operations crippled by "Project Retire", an undertaking by Ontario police targeting the club. As a result of this, Satan's Choice, under their new club president Andre Wattel, decided to join the Hells Angels and abandon their own clubs identity and autonomy because it would mutually benefit their criminal enterprises.

Satan's Choice, along with most of the other major Ontario biker gangs, including the Loners, Lobos, and Para-Dice Riders, "patched over" to the Hells Angels on December 29, 2000. This overnight placed the Hells Angels in a position of dominance in Ontario, and in effect put an end to any independent existence of the Satan's Choice Motorcycle Club. However, many former member of Satan's Choice would remain active criminals after the club was dismantled, such as the former president of the Hamilton chapter Ion Croitoru, who would be charged but not convicted of the murder of Lynn & Fred Gilbank in January 2005.