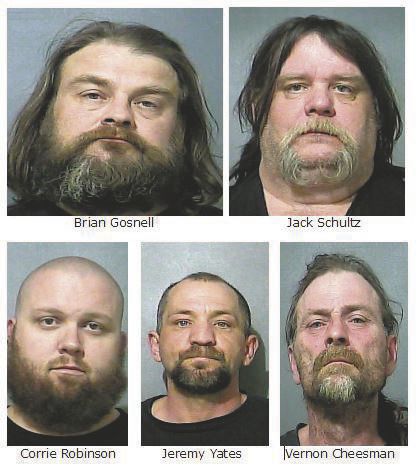 A sixth person has been arrested in connection with a March 30 shooting outside the Diablos motorcycle clubhouse at 27th Street and Eighth Avenue.

Wesley E. Charlton Jr., 48, of Terre Haute, appeared Tuesday in Vigo Superior Court 5 where he received a trial date of Oct. 24 and another hearing date of Sept. 28.

Charlton had been wanted on a warrant issued July 6 for criminal organization activity, a Level 5 felony; assisting a criminal and obstruction of justice, both Level 6 felonies.

Information filed with the court in the case alleges Charlton picked up shell casings fired outside the motorcycle club so they could not be used as evidence in an investigation of the shooting.

A Terre Haute man was shot as he was driving past the club on March 30, and other people were injured by flying glass from the shots. Police initially arrested five club members. Charlton is accused of helping one of those men involved in the incident.

Others charged in connection with the gunfire incident are:
• Brian W. Gosnell, 45, of Terre Haute, on charges of aggravated battery, a Level 3 felony; criminal gang activity, criminal recklessness, criminal organization activity, possession of a handgun without license, unlawful possession of firearm by domestic batterer and possession of handgun by convicted felon. He was released from jail to the work release program on July 5, and has a Sept. 19 trial date.
• Corrie E. Robinson, 32, of Terre Haute on charges of criminal gang activity, obstruction of justice and assisting a criminal. He was released April 19, and has an Aug. 22 trial date.
• Those same charges have been filed against Jack W. Schultz II, 57, of Terre Haute; Vernon Cheesman, 52, of Brazil; and Jeremy M. Yates, 40, of Clinton.
Yates was released from jail June 7 to in-home detention and has Sept. 19 trial date.
Schultz was released July 20 to in-home detention, while Cheesman remains in jail. Both have Oct. 3 trial dates.