The tragic tale of Kevin Kerfoot 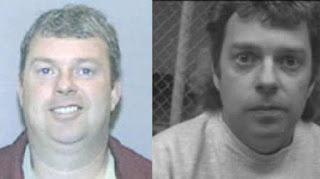 CTV News is reporting that A British Columbia man convicted of leading a cocaine and ecstasy smuggling ring has been sentenced to 13 year in a U.S. prison. U.S. Attorney Annette Hayes says Kevin Kerfoot, 53, of Surrey organized an operation smuggle 41 kilograms of cocaine to Canada from Washington state in 2005.

The court decision states that they were bringing 20 pounds of ecstasy from Canada to the US and traded it for 41 kilos of cocaine to be brought back to Canada. His underlings got caught and named him as their leader. He doesn't look like a mastermind to me. He kinda looks like a dweeb.

The court decision states that he came from a good home and his brother is a wildly sucessful businessman. A coworker of mine that knew him said it's a rather sad tale. The guy's parents left him a fortune and he was set for life but he pissed it away on gambling and booze so he started drug trafficking for the Hells Angels to get out of debt. His brother Greg Kerfoot owns the Vancouver Whitecaps and has a Christy Clark connection.

His underlings named him but he certainly won't name who he was working for or else he'd be dead. They already tried to shoot a co accused in Kelowna but the shooter was on bicycle and the witness survived and ran him down in his truck.