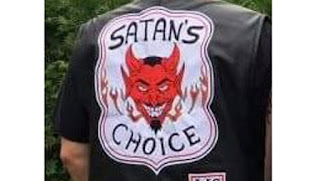 ﻿
Ontario police can be forgiven for doing double takes this summer at the sight of bikers wearing the grinning devil patch of the Satan’s Choice Motorcycle Club on their backs. Once the second largest outlaw motorcycle club in the world, the Satan’s Choice club folded in December 2000 when it was absorbed by the Hells Angels.

This summer, a group of Durham and Ottawa-area bikers have re-invented the Satan’s Choice club, which will likely upset Hells Angels bikers, said Det. Sgt. Len Isnor of the OPP Biker Enforcement Unit.
“It’s a bit shocking,” Isnor said. “By somebody bringing them back, there could be some problems.
Yes, we’re going to watch.”
The Hells Angels had no immediate comment on the new club.

The old Satan’s Choice had well-publicized clashes with the law, but the new version of the club plans to stay out of jail and trouble, according to a spokesperson, who spoke to the Star on the condition that his name not be published.
“We want to keep the club alive but we’re all law-abiding citizens,” he said.

The re-emergence of the Satan’s Choice in Eastern Ontario comes after the Hells Angels shut down its elite Nomads chapter outside Ottawa last September. That Hells Angels’ chapter was based in in a 0.92-acre, gated compound off Highway 417, just a 15-minute drive from downtown Ottawa.

The new Satan’s Choice spokesperson said his club has a clubhouse, although he declined to say where it’s located. The move to re-establish the Satan’s Choice comes out of respect for older members and the tradition of an all-Canadian club, he said. The club was originally founded in the GTA as part of an auto club back in the late 1950s.


“We have talked to several of the original members and have had nothing but positive feedback from them,” said the new Satan’s Choice spokesperson.

The Satan’s Choice has always been an all-Canadian club. They folded briefly in the early 1960s and then re-emerged under former international boxer Bernie Guindon of Oshawa. It grew to more than 300 members by the early 1970s, making it the second largest outlaw motorcycle club in the world, behind only the Hells Angels.

There are currently 200 full Hells Angels in Ontario and 500 across Canada, Isnor said. The Hells Angels are a U.S.-based, international club with members on five continents and in 56 countries, according to the club’s website.

The old Satan’s Choice had several well-publicized clashes with the law, including several members who became involved in drug trafficking. Former member Cecil Kirby disappeared into a witness protection program in the early 1980s after admitting he had been hired to do murders for the local mob.

Their former clubhouse on Kintyre Ave. in south Riverdale was hit with a rocket launcher attack in the mid-1990s. The new Satan’s Choice moved into the Ottawa area last month and has 48 members and two “strikers” — or prospective members — the spokesperson said.