Two busts in PEI keep the pressure on the Hells Angels 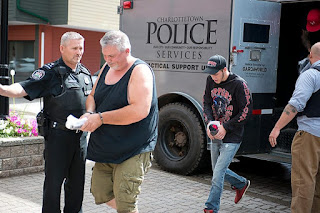 This post is going to clearly demonstrate the polar opposites in how the Maritimes are dealing with the Hells Angels compared to how BC generally and Surrey specifically is. They represent two opposite extremes. We are now forced to ask why has BC dropped the ball?

"OCTF arrested who they believe are all nine members of the Charlottetown club (affiliated with the Woodbridge hangaround chapter in Ontario) for allegedly operating an illegal lottery." OK so the HA puppet club in PEI is afilated with the Ontario Hells Angels, specifically Woodbridge where all the mob violence is currently under way.

Nobody cares about illegal lotteries. That does not devastate communities like crack, fentanyl and crystal meth. Yet this appears to be a proactive approach in dealing with the plague before it cripples PEI like it has Surrey and Vancouver. Linda Airhead Hepner says gang shootings affect business. No they do not. Letting them sell crack in public does and she STILL refuses to do anything about that. She cries about the symptom while she refuses to address the cause. In fact she is actively involved in promoting it just like Dianne Watts was.

The Guardian is also reporting that "Members of the Organized Crime Task Force, which included Charlottetown, Summerside and Kensington police officers as well as the RCMP federal investigation unit, executed search warrants at the Harley Club at 352 University Ave. and a Hells Angels hangaround club at 205 Fitzroy St. throughout the late morning and early afternoon on Saturday. RCMP Cpl. Andy Cook, who is also provincial outlaw motorcycle gang (OMG) co-ordinator, said the warrants were served under the liquor control act."

Wow, PEI has a Motorcycle Gang Unit and BC doesn't imagine that. That is the root of the problem rght there. After the OMGU did such a great job in Kelowna busting David Giles and Johnny Newcome, the corrupt Christy Clark government disbanded the OMGU.

In PEI they are even going after the Charlottetown Harley Club for selling booze. Bobby Falls son Cory was hanging out with s drug dealer in PEI but so was the Vancouver Mayor's son. Nailing them for drug trafficking and prostitution would be in order but for selling booze in their own clubhouse is a bit extreme. Yet us going to the other extreme and providing their drug dealers police protection on the Surrey strip is simply bat sh*t crazy.

With regards to selling booze “The Charlottetown Harley Club has been doing this for a long time, the Hells Angels Club has not since they’re fairly new…. So it’s the oldest club on Prince Edward Island and the newest club.” Clearly the police are rightfully concerned about the Charlottetown Harley Club endorsing the Hells Angels because everyone knows what comes next.

“If the Hells Angels weren’t in the ACC, would things be what they are right now? They talk about biker respect, biker rights and motorcycle safety but when the Hells Angels are in your group, it automatically taints you,” said Cook. Indeed it does. So why are we providing police protection for their drug dealers on the Surrey strip? The Surrey RCMP letting the Hells Angels in their group has indeed tainted them. We need to bring back the OMGU in BC. It's as simple as that.