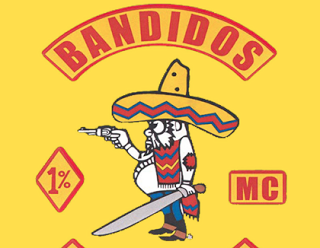 FBI agents have arrested the “Sergeant at Arms” of the Bandidos Motorcycle Club in Albuquerque as part of an investigation into trafficking in methamphetamine, stolen firearms and stolen vehicles, including a tractor trailer whose driver was found dead in a Texas hotel parking lot earlier this year.

Federal agents seized more than 20 stolen vehicles and trailers at three different locations in and around Albuquerque last Thursday during pre-dawn raids. During the raids, they arrested Thomas Giles, described by agents in court documents as the motorcycle club’s sergeant at arms, and another man, Michael Vickery, on drug trafficking charges.

Giles and Vickery, who was described in court filings as a “hang around” and not a club member, were charged with distributing methamphetamine and heroin. Agents made it clear in search warrants filed in the case that the investigation was not of the Bandidos Motorcycle Club, but was focused on Giles and his associates.

According to the search warrants, FBI agents believe Giles and others were involved in an array of crimes, including buying and selling stolen motorcycles and vehicles in exchange for methamphetamine. Agents were also told Giles was buying firearms stolen in residential burglaries in exchange for methamphetamine. A rifle and four revolvers were seized during the raids.

In some cases, the motorcycles or vehicles were broken down into parts and sold via the internet. In other cases, the stolen motorcycles were transported out of state and sold so that their owners wouldn’t recognize them being ridden in the Albuquerque area, according to a search warrant affidavit.

The vehicles were towed to tow yards where they will undergo technical inspections.
FBI agents arranged for informants to make hand-to-hand drug buys from Giles and Vickery, and found the two were often in communication with each other during the drug sales. They also arranged to have an informant purchase two stolen vehicles from the group that were then delivered to FBI agents.

Agents raided three locations, a home on the 1800 block of Blume NE, another on the 300 block of Buena Ventura Court NE and a large business location in the 5200 block of Edith NE. Agents believe the semi-truck and trailer they recovered was stolen in June of this year in Stafford, Texas, where the driver of the truck, Spencer Brown, was found dead in the parking lot of the motel where he was staying.

Vickery has been ordered held without bail. Giles’ detention hearing is scheduled for Thursday, but he remains in custody. Vickery has two prior felony convictions for aggravated battery and receiving or transferring a stolen vehicle. Giles has prior arrests, but no felony convictions.