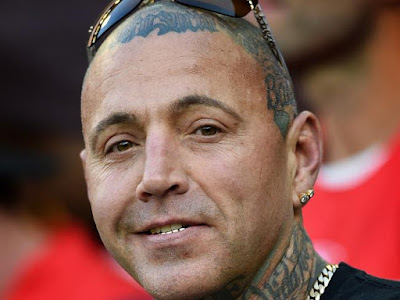 GANGLAND figure and former bikie enforcer Toby Mitchell was due for release from prison this week.

The Herald Sun understands Mitchell has spent much of his jail term in Fulham Prison, near Sale, in Gippsland.

His stint behind bars was incident-free and he was regarded as a model prisoner.

HOW TOBY MITCHELL DODGED A BULLET (link is external)

Several sources confirmed that Mitchell’s was to be released this week. He was jailed in June, 2016, for serious drug offences (link is external).

The tattoo parlour operator had been busted nine months earlier with 500g of cocaine and methylamphetamine in his Range Rover hire car. The drugs were found in a footwell of the vehicle during a search by Australian Federal Police agents.

One witness said she saw hard man Mitchell stepping out in Melbourne’s Southbank today with friends. The former Bandido appeared relaxed as he got back into the swing of life as a free man, the observer said.

Mitchell pleaded guilty to two counts of possessing a drug of dependence, possessing an illegal baton and possessing drugs. There was some puzzlement Mitchell was able to escape with a 20-month sentence.

At the time, the ex-kickboxing star had been on bail for assaulting a cyclist in a road-rage incident at Docklands (link is external).

Mitchell — one of the Melbourne underworld’s most prominent figures — has been shot twice in the past (link is external), both times when he was associated with the Bandidos outlaw motorcycle gang.

In November, 2011, he was ambushed at Brunswick and suffered extensive injuries at the hands of a gunman.

Mitchell after getting bail from the Magistrates Court. Picture: Jay Town

Mitchell is one of the Melbourne underworld’s most prominent figures. Picture: Mark Stewart

Mitchell lost one of his kidneys, his gallbladder and three-quarters of his liver. In March, 2013, he was again wounded when a Bandido-affiliated clubhouse at Melton was peppered with bullets in a drive-by attack.

That case was not believed to have been an attempt on Mitchell’s life. Mitchell later quit the Bandidos. At the time of his 2016 arrest, Mitchell had reportedly been in plans to outline his life story in a tell-all TV interview.

It is unclear whether that will now go ahead. Mitchell is known for his love for the good life, flaunting his expensive tastes on social media during spells outside prison walls.

He is understood to maintain a connection with the City of Ink tattoo parlour in South Melbourne.
Among his business partners is close mate and former Richmond footballer Jake King.