Is it FAKE or is it TRUE? Yesterday did we trough the Spokesperson for TBM Scandinavia Michael Green receive some info saying, that Kinfolk MC should have established a new Chapter in Norway.

Michael Green have told us, that he earlier yesterday had a talk with a member from Kinfolk MC in Texas, who told him that Kinfolk MC now have a Chapter in Norway, and there are 4 Full Patch members in Norway. 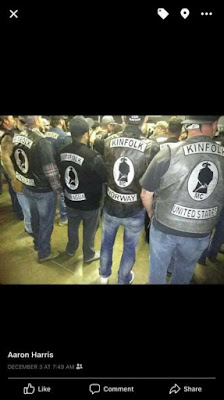 If you take a look at Kinfolk MC´s Facebook-page you then will see a post from december 12, 2017, and see the Norwegian Flag, but that´s all we have been able to find about Kinfolk MC Norway. 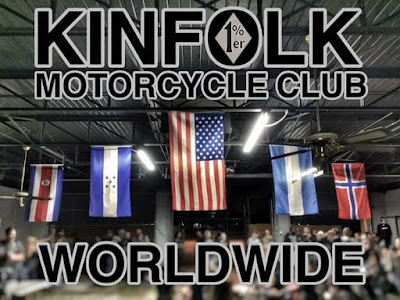 
Kinfolk MC were founded in Texas, USA in 2016. Their website was first registered to an address in Bells, Texas in September 2016. The town of Bells is located approximately 70 miles northeast of Dallas.One of the Kinfolk key founding members is believed to have been Dan Schild, also known as “Chopper Dan”, a former Bandidos National Chapter officer. It has been stated that Dan Schild started the Kinfolk Motorcycle Club after being looked over for the role of Bandidos National President after former National President Jeff Pike was arrested in early 2016. The Bandidos National President role went to Bill Sartelle, known as “Big Deal”. Many of the members of Kinfolk are former members of the Bandidos Motorcycle Club. There are varying accounts about a mass exodus from the Bandidos, either because they were put out by the club, but also because of infighting that caused members to leave by their own account.


The following statements were published by the Aging Rebel website and are said to have come from the Kinfolk MC National meeting held on 15 October 2016:

Motorcycle Club Patch / Motto / Colors
The Kinfolk Motorcycle Club patch consists of a man, viewed from the rear, wearing a wide brim hat and long coat, holding a pistol behind his back, looking much like an old west gunslinger.

There are no famous members of the Kinfolk Motorcycle Club, at least in a celebrity sense.

Kinfolk MC Crime / In The Media


2017 – 4 March, 2017. Kinfolk MC member Dusty Childress and another man are shot in Jones County, Texas. Dusty Childress dies from his injuries. Bandidos MC member Wesley Dale Mason is later charged for the murder.
2017 – 30 July, 2017. Three members of the Bandidos MC and a support club member are shot at Mulligan’s Chopped Hog bar in East El Paso, Texas. Those shot are Bandidos El Paso Chapter President Juan Martinez, along with Ballardo Salcido, Juan Miguel Vega-Rivera and David Villalobos. On 2 August Kinfolk MC member Javier Gonzalez is arrested by police on aggravated assault charges relating to the shooting. On 3 August Bandidos Chapter President Juan Martinez dies from his injuries. Gozalez is later charged with Engaging in Criminal Activity and murder. He is held on a bond of $1 million. On 10 August Kinfolk member Manuel Gallegos is charged with Engaging in Criminal Activity and assault in connection with the event.