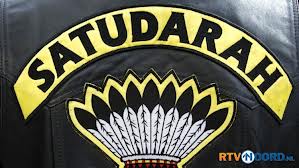 According to information coming out of the New York City District Court, an associate of a major Dutch motorcycle club – the Satudarah Motorcycle Club, the most violent and ruthless motorcycle club in the Netherlands and on par with the Hells Angels United States – has been convicted of illegal distribution of steroids after pleading guilty to these charges.

Sean Dubanovich admitted that he was working as a New York City-based domestic steroid “mule”, distributing and transporting these illegal and illicit drug with the intent to sell these controlled substances in New York City and throughout the tri-state area. He also copped to charges of conspiracy to commit these same crimes as well as international money laundering charges as part of this investigation.

The arrest of Dubanovich comes after year long US DEA investigation concludes
The US Drug Enforcement Administration (DEA) had started a year-long investigation into this Dutch motorcycle gang and Dubanovich in particular after receiving a tip from the customs Department of Thailand that Dubanovich was trafficking and transporting a significant amount of steroids and other prescription drugs directly from Thailand to the United States.

Apparently, Thai officials became aware of the connection between Dubanovich and the Dutch motorcycle gang and began investigating all of the packages that he was sending from his home in Thailand to locations in the Netherlands, the UK, and the United States.

After intercepting these packages and discovering that they contain illegal and illicit steroids and other prescription drugs, the Thai officials contacted the governments of the nations that these packages were to be sent – including the US – and all parties agreed to furthering investigate this matter as part of a joint task force.

The investigation stretched over 12 months, with all of the partner nations making sure that they were able to collect enough information on Dubanovich and the Dutch motorcycle gang to present a compelling case and secure a conviction. The United States was given priority for this conviction because Dubanovich was selling the most drugs and steroids in New York City, and the nations involved agreed that this was the strongest case against Dubanovich.

Dubanovich’s attorney originally argued that he was mentally impaired and unfit to stand trial
Before Dubanovich was presented with the full weight of all of the evidence presented against him, his attorney was trying to put forth an argument that he had been exposed to sustained carbon monoxide levels, had an anoxic brain injury, was participating in outpatient rehabilitation for TBI, had been a recovering opiate addict, was suffering from sleep apnea and hepatitis C and was also dealing with clinical depression and anxiety and these were the reasons why he got mixed up with the Dutch motorcycle gang in the first place.

Obviously, as any good defense attorney will do, it’s clear that the attorney was just trying to create some sort of smokescreen for the behavior of Dubanovich that was conclusively proven to be chronic, consistent, and premeditated.

Almost immediately after the US district attorney presented the overwhelming evidence against Dubanovich he changed his plea, pled guilty as part of an agreement for a slightly reduced sentence – though sentencing hasn’t concluded yet – and has agreed to go along with investigations into this Dutch motorcycle gang in an effort to find out just how deep this rabbit hole goes.