No Surrender members arrested in investigation into Almere woman's murder 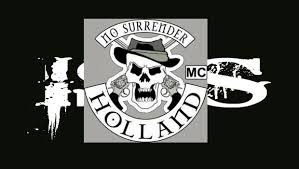 The police arrested two members of outlaw motorcycle club No Surrender who they believe may have been involved in the murder of Esther Paul (link is external) from Almere. The two men, aged 32 and 40, were arrested in Amsterdam on Monday, the police said in a statement on Tuesday.

The No Surrender members are actually suspected of being involved in a violent robbery in Literatuurwijk in Almere in December 2016, in which a 78-year-old woman was hurt. The police believe that this robbery may be connected to the death of 43-year-old Esther Paul, whose body was found in the water of the Veluwemeer in Biddinghuizen in April last year.  (link is external)

The police suspect that Paul may have been murdered in a conflict that may stem from the robbery in Almere.
According to the Telegraaf, Esther Paul is the ex girlfriend of Frank G. - a main suspect in a cannabis case around the former director fo Amsterdam taxi center TCA. According to the newspaper, Paul kept large sums of money at her home. A man came to pick up money on behalf of a criminal, but it was gone. "Esther was warned several times, but the money did not reappear", an acquaintance of Paul said to the newspaper.

In the days before her death, Paul was staying in a chalet on camping grounds Riviera Beach in Biddinguizen, about 8 kilometers from where her body was found. The were reports that she was in hiding (link is external), though the police did not comment what or who she was hiding from.