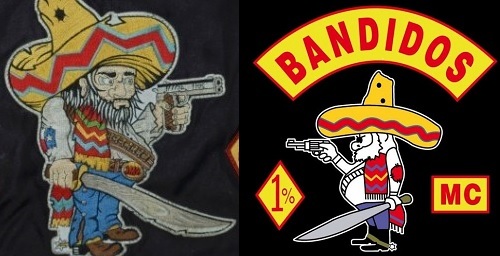 As state authorities struggle to successfully prosecute more than 150 people indicted in the aftermath of the 2015 deadly biker clash in Waco, the feds are pushing forward here with a racketeering trial of two former leaders of the Bandidos for 16 years of alleged criminal conduct.

An anonymous jury of eight men and four women, and four alternates has been picked for the trial in San Antonio of former Bandidos president Jeffrey Fay Pike, 61, of Conroe and then-vice president John Xavier Portillo, 57, of San Antonio. Opening statements are scheduled for Tuesday morning in front of Senior U.S. District Judge David Alan Ezra for the trial that may last up to three months.
Assistant U.S. Attorneys Eric Fuchs and John Gibson submitted a sealed list of 100 witnesses (not all may testify) that include former Bandidos, rival bikers, police officers, federal agents and gang experts, as the prosecutors try to prove that between January 2000 and up until their arrests in January 2016, Pike and Portillo were involved — directly or indirectly — in a host of racketeering crimes. The feds allege Portillo, who was vice president from 2013 until his arrest, and Pike directed or sanctioned extortions, beatings, even killings, of rivals in order to keep control of the Bandidos’ territory and profits.

The Bandidos were formed in the Houston area in the 1960s and earned an outlaw reputation, using the motto: “we are the people our parents warned us about.” Law officers consider the Bandidos to be Texas’ ruling biker gang.
But its current and former members say they just like motorcycles, particularly Harleys, and the biker lifestyle. Many pride themselves in the “one percenter” credo, a phrase coined by the former president of the American Motorcyclist Association who once stated that 99 percent of bikers are law-abiding citizens and 1 percent “outlaws.”
“It’s not a gang,” Royce Showalter,one of the Bandidos’ last surviving founders, told the Express-News in 2015. “It’s a motorcycle club. (The police) they’ve always tried to say there’s crime involved. … But you can say that about any group. You get so many people in a group and there may be a few who might be bad eggs.”

Pike was national president of the group from February 2006 until he gave up the post when he, Portillo and then national sergeant-at-arms Justin Cole Forster, 32, were indicted and arrested in January 2016. Portillo and Forster have been jailed since, and others have moved into their posts within the Bandidos.

The Bandidos have been in national headlines in recent years largely over the deadly 2015 confrontation in Waco, though the incident may only be briefly mentioned in the federal trial, Fuchs told Ezra last week.

The May 2015 shootout involving members of the Bandidos and Cossacks motorcycle clubs outside a Twin Peaks restaurant in Waco left nine bikers dead — including Jesse Delgado Rodriguez, 65, of New Braunfels — and 20 injured. Local police there arrested 177 bikers after the mayhem, and more than 150 people were eventually indicted on felony charges of engaging in organized criminal activity resulting in the deaths and injuries.

Ballistics evidence showed that police bullets struck four bikers, killing at least two of them. The three officers involved in the shooting were no-billed by a grand jury (not indicted) after being cleared by an internal investigation.

Of the bikers indicted in Waco, only the president of the Bandidos’ Dallas chapter has gone to trial, and it ended with a hung jury. And in early February, McClennan County District Attorney Abel Reyna dismissed 13 other Twin Peaks cases and recused himself from two others, the Associated Press reported.
“We are not going to try the Waco case in here,” Ezra said last week during a pre-trial motions hearing. “They’re having a hard time having it tried in Waco, let alone here. I’m not going to spend valuable trial time on it. ...It’s not part of this indictment. ”

During last week’s hearing, Ezra ruled on other numerous pre-trial motions that included anything from objections by prosecutors to defense lawyers introducing evidence that the Bandidos are now a nonprofit organization to objections by the defense over the Bandidos being referred to as the “Bandidos Motorcycle Organization.”

The Bandidos in May 2017 filed as USARG Inc. to become a 501(c)(3) nonprofit corporation with 123 licensed chapters in the United States, court records said. The judge denied motions to sever the defendants’ cases or to delay the trial despite objections from Dick DeGuerin, Pike’s lead lawyer, and Mark Stevens, Portillo’s lead attorney.

The latest indictment alleges Portillo declared war on rivals after becoming vice president in 2013 and outlines several clashes between the Bandidos and rival clubs. The indictment also accuses Bandidos bikers of harassing and attacking bikers across Texas, as part of the war that Portillo had declared, and lists the killings of three men in separate incidents: Robert Lara in Atascosa County in January 2002, Anthony W. Benesh III in Austin in March 2006 and Geoffrey Brady in Fort Worth in December 2014.

Pike and Portillo’s defense lawyers have argued that the feds are wrongly holding Pike and Portillo accountable for conduct limited to within respective Bandidos chapters or to individual members.
“They’re autonomous,” DeGuerin argued about the chapters at a pre-trial conference in January.

Howard Wayne Baker, 62, was convicted at a trial in Tarrant County of Brady’s murder, the Dallas Morning News reported. Baker was the president of the Fort Worth chapter of the Bandidos motorcycle gang, according to the Morning News.

It’s not clear if any of them will testify. The feds’ witness list is sealed. If convicted, Pike and Portillo face up to life in prison.