Ex-Bandidos member testifies about being ‘out in bad standings’ 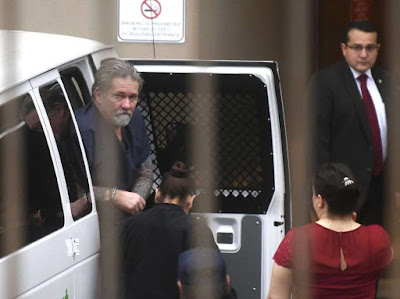 Andrew “Corky” Gomez is now a pariah to the Bandidos Motorcycle Club despite dedicating seven years of his life to the group, even helping it commit murder. Gomez, who was in the Bandidos from 1998 to 2005, testified today that he took over as president of a local Bandidos chapter in San Antonio in 2002 when its then-president John Xavier Portillo was promoted to the national chapter.
But Portillo, who is facing racketeering charges in a three-month trial in San Antonio with another former Bandidos leader, first had Gomez demoted and later kicked “out in bad standings” after Gomez got crossways with the outlaw biker club and refused to hand over his motorcycle to the Bandidos, Gomez testified.
“Basically, you’re out of the biker world,” Gomez said when asked what he meant. “You can’t go anwywhere they (Bandidos) are.”

Gomez said he was beaten to the point his eyes swelled shut and he had broken ribs, had his Texas “rocker” (patch) and later his Bandidos vest revoked, and he was harassed repeatedly.

Gomez said he shot a Bandidos member who was part of a group that harassed him at his San Antonio auto shop and later was to be a witness for police against another Bandidos member, Johnny “Downtown” Romo, who had fired a gun at Gomez.

At one point, Gomez said, he reached a deal to try to end the harassment — he would not press charges against the Bandidos if they removed his “out in bad standings” designation and left him alone.

The deal lasted “a couple of years,” until Gomez bought a beer for a Bandidos member he saw at a bar, Gomez said. As Gomez reached out to shake the member’s hand, he was punched instead, Gomez testified.

Gomez said he called Romo, who told him Portillo refused to remove the designation because Gomez had not turned over his motorcycle. Gomez said he decided to pay $4,000 to the club to end the pressure.


Gomez also testified that in January 2002, while he was vice president of the Bandidos’ Southwest San Antonio chapter, he was part of the plot to retaliate against Robert Lara for the 2001 killing of Javier Negrete, who was the local chapter’s secretary at the time.

Portillo was president of that chapter at that time, and Gomez said Portillo showed him the .22-caliber pistol he was going to give Bandidos member Richard Merla to kill Lara.
Gomez also testified that after Lara’s slaying, Portillo called him to help him get rid of the weapon. Gomez drove Portillo to a creek off Rigsby Avenue, where Portillo tossed it in the water, Gomez said.

That part of Gomez’s testimony, however, conflicted with Merla, who testified on Tuesday that Portillo destroyed the gun with a torch at the home of Portillo’s brother. Gomez also testified that he took over Negrete’s drug operations after his death and would often supply Portillo and other members with large quantities of cocaine and methamphetamines.

As part of a cooperation agreement with the feds, Gomez pleaded guilty to conspiracy to commit murder and is facing 10 years in prison instead of the possibility of a life term. Portillo was promoted to the Bandidos’ national chapter as national sergeant at arms in May 2002, and became vice president in 2013, according to testimony.

He is on trial with Jeffrey Fay Pike of suburban Houston, who was the club’s president from 2006 until he and Portillo were arrested in January 2016. The criminal conduct Gomez alleged occurred during the reign of George Wegers, who stepped down as Bandidos president in 2005 amid his own racketeering case in Washington state. Pike was vice president under Wegers and under cross-examination, Gomez said Pike “was a good guy.”

Portillo’s lawyers are to cross-examine Gomez this afternoon.